Regarding the feverish splash of Ty Segall’s paintings – a raw blurting of acrylics in the service of static figure work and portraiture – it is hard not to feel the urge to kick and scream. This is what the paintings want of you, to regard life with the same suspicion and the growing sense of disbelief that the shapes you have come to depend on are…undergoing some changes. And the changes might not be the latest mods we were promised, either!

Ty Segall is a musician, producer and artist born in Palo Alto, CA 1987. He holds a Bachelor of Science degree in media studies from University of San Francisco. He lives and works in Los Angeles. Proud parent of one fanny doggy. In this, his first solo exhibition ANYWHERE (after one painting was displayed at the SCC’s “Things” group show in Spring 2016), he is clearly still on a joyful honeymoon with his craft. There is a zestful commitment to the image in each of his works, as well as a fascination with the traditional approach. These aren’t multi-media pieces; they are paintings, and Ty’s belief in the promise of the color palette is as strong here as it is in his series of acclaimed rock and roll albums. Part of his skill in that area involves arrangement; a sense of what goes in the width and breadth of the piece and when and how it impacts most powerfully. This dynamic is fully evident in all of his painted expressions.

Reality is on trial throughout Assterpiece Theatre, as Ty finds contradiction in the presentation of everyday people, comic disassociation and ominous suggestion. And then a black void where the eyes of animals are located. The grouping of dominant mammals displayed in their self-satisfied glory, set alongside typical house creatures might seem to some a suggestion of indictment, but there is instead an recognition of the world as it is here. Perhaps not a world that we wish to live in – but was that ever the choice? While the view is deep and vivid, one cannot help but think of these pieces as observations made en courant, passing swiftly and intuitively past the archetypal images that once defined a civilization but are now broken down beyond meaning. Whether regarding a strongman on the beach, fawned over by a platinum pinup or a pornographic priestess, wares held forth for all to see, Ty’s confident line breaks them unsympathetically into component parts, scoring the blanks within without them with pawing of color, smears of texture. A simple set of views and subversion are evident – but are we coming up with one less subversion in the last analysis? One aches to understand these pieces with the incisive view of a Mallarmé, then retires once again to the cold comfort and incessant demand of the present flesh.

Within the worlds of rock and roll, it is Ty’s ultimately democratic observation that all are the same. Expressions of rockabilly, punk, psych, prog and/or metal are all the same: as sophisticated as they are primitive. It is only in how you position the hand, and fluctuate the tempo that creates a difference. In the case of Ty Segall, the crippled old adage “less is more” is part of what is under siege in this show. Chopping viscerally at the same function of the old masters, Ty Segall is observing the inevitable shift of meanings – and the revulsion that follow – as one age gives way to another.

Soccer Club Club is an exhibition and performance space owned and operated by Drag City and located in an intact private bar built by a former Polish soccer star. 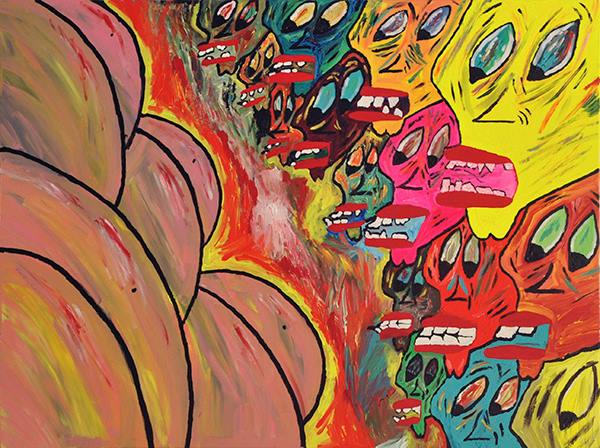