Carris Adams: This, That, and the Third

On view through Saturday, April 8th

Tiger Strikes Asteroid is very pleased to announce the first solo exhibition in Chicago by artist Carris Adams entitled: This, That, and the Third. A painter of signs, Adams could be thought of as what French curator and theorist, Nicolas Bourriaud, might refer to as a “semionaut” of the landscape. Drawing her source material from signage found in varying locations that range in class and systemic inequalities, Adams work foregrounds and celebrates the social practices of the day-to-day activities that animate the sites she takes as her subject. Through subtle formal and conceptual strategies, the artist raises these signs to a level of abstraction. This is a different operation than simply making the signs abstract, rather her paintings ask the viewer to look more carefully than they may otherwise; bringing other senses and visual cues into play to augment the reception of the altered source material. In so doing, she challenges viewers to try to both feel signs in a new manner and decode abstractions in a way that connects us to our neighbors. In this regard, Carris Adams’s paintings are not abstractions at all, but a tool for humanizing space.

This, That, and the Third, is comprised of a series of new oil paintings that upon first glance appear to be black monochromes, however, on closer inspection, we may detect traces of language from signs that constitute something like a miraculous appearing in the cityscape. One untitled painting reads “Pray,” with text derived from an anomalous painted-over newspaper stand box, while another work is derived slogan from the side of a moving truck which echoes the popular song, “I’ll Take You There,” the number one billboard hit from the early 70s by the lead Staples Singer: Mavis Staples. That Adams’s work not only pictures signs but also traces the way in which signs circulate across time and genres, illuminates the fluid nature of what signs signify. Some signs in this body of work are more enigmatic as is the case in a grouping of paintings that borrow their language from an ad that reads “Time for Jesus,” which uses words, symbols, and imagery to convey its message. Adams engages sign as an icon in the wall drawing MXMLK, a double- portrait of Malcolm X is fused with Dr. Martin Luther King, Jr. Here we touch on a dimension of Carris Adams’s practice that seldom gets remarked on, which we might call faith in the landscape. That Malcolm X and Martin Luther King, Jr. were both men of faith themselves and in turn became icons of the Civil Rights Era and America, reveals a new direction in the artist’s practice that delves into socio-religious iconography. Nevertheless, This, That, and the Third, constitutes a continued project of humanizing other-ed spaces, opening up our collective memory embedded in the landscape, and questioning assumptions about our shared world.

Carris Adams is a visual artist whose practice consists of drawings and paintings that reference signs and signifiers in the landscape pointing to systemic inequality and resilience. The conceptually multi-layered works seek to inform and position viewers to recognize their reactions concerning class, and othered bodies. Adams received her BFA from the University of Texas at Austin (2013) and her MFA from the University of Chicago (2015).
. 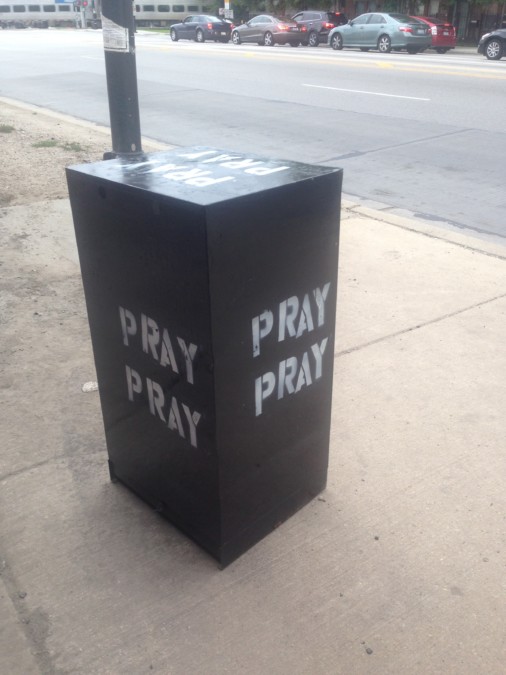