Space by Proxy: Readings and Writings for Precariat

On view through Sunday, March 12th

Can we create a safe “DIY” space by gathering politely in a public art institution? In that space, can we activate? What does that activation look like, sound like, feel like? Is this a contesting of public space? Or a collaboration? Or merely a brief occupancy, poignant or otherwise? The artists will respond to these questions, along with the themes present in the exhibition, in their readings and responses.

A limited edition run of chapbooks will be produced in conjunction with this event.

This event is co-organized by Matthew Sage of Patient Sounds for Precariat, an exhibition guest curated by Ariel Gentalen.

Matthew Sage is an interdisciplinary artist, educator, writer, and publisher/editor living in Chicago. He is interested in creating works that negotiate and trouble the liminal territories between physical bodies/spaces and their digital counterparts. He owns and operates Patient Sounds , a private press record label and book publisher established in 2009.

Emily Martin is a writer and educator from Brooklyn, currently living in Chicago.

Sammi Skolmoski is an interdisciplinary artist and writer from the northwest side of Chicago. Her writing engages the botanical, the female, and the extraterrestrial through accessible, dry observations. Skolmoski holds an MFA from the School of the Art Institute of Chicago where she studied as a New Artist Society Scholar, Smith Enrichment Scholar, and the recipient of multiple grants. She is a Luminarts Cultural Foundation Fellow in writing and held a 2016 summer residency at the Union League Club of Chicago Library. She is currently the managing editor at Featherproof Books.

Willy Smart is an artist who works in presentational and propositional forms. Willy makes lectures, sculpture, and publications that propose extended modes and objects of reading and recording. Recent exhibitions and performances have taken place at BFI, Miami; The Luminary, St. Louis; Essex Flowers, New York; and Mélange, Cologne, DE. Willy holds an MFA from the School of the Art Institute of Chicago. Willy directs the conceptual record label Fake Music.

Daniel Woody lives in Chicago, where he writes poems and teaches writing. His work has appeared in The Volta, Word Riot, BOAAT and HOUND. 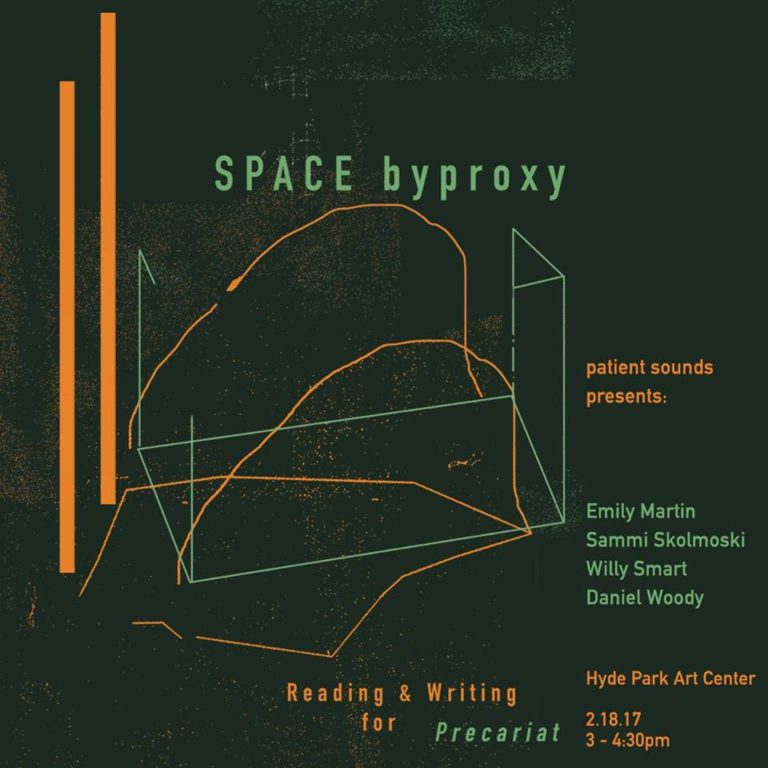