Radical Relations!
Memory, Objects and the Generation of the Political

On February 6, an exhibit exploring black liberation politics on the South Side of Chicago from 1967-2017 will open at The Center for the Study of Gender and Sexuality (CSGS). Curated by Romi Crawford, Associate Professor at the School of the Art Institute, this exhibit will display images of black artists, poets, writers, educators, and political organizers in everyday life, as well as display their personal communicative and decorative materials that have now become memorabilia, traces of a generation’s cultivation of radical care, a will to make social change felt at the level of their communal, familial, and intimate relations.

Romi Crawford, Ph.D. is Associate Professor in Visual and Critical Studies and Liberal Arts at the School of the Art Institute of Chicago. Her research revolves primarily around formations of racial and gendered identity and the relation to American film, visual arts, and popular culture. She was previously the Curator and Director of Education and Public Programs at the Studio Museum in Harlem and founder of the Crawford and Sloan Gallery (NYC, 1994-1998). Her publications include writings in Art Journal; Cinema Remixed and Reloaded: Black Women Film and Video Artists (University of Washington, 2008); Black Light/White Noise: Sound and Light in Contemporary Art (Contemporary Art Contemporary Art Museum Houston, 2007); Frequency (Studio Museum in Harlem, 2006); Art and Social Justice Education: Culture as Commons (Routledge, 2011) and Service Media (Green Lantern, 2013).

This event is part of Care@Chicago, a project designed to examine and practice forms of self-care and ask what constitutes repair and relief in states and times of trauma. Co-sponsored by the Center for the Study of Race, Politics and Culture. 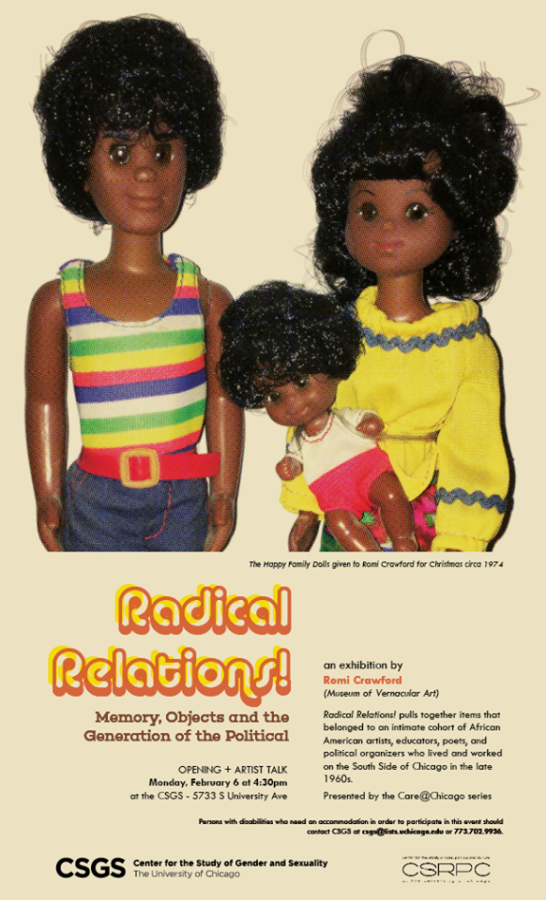