Regina José Galindo is an internationally acclaimed Guatemalan artist who is known for her works of performance art. Galindo has developed a socially and politically motivated practice using her body as both material and site to create powerful public actions. Often combative and shocking, Galindo elegantly drags into the public realm confrontational topics surrounding inequalities and atrocities that have become commonplace across the globe.

Galindo is the recipient of many prestigious awards and honors, including a Golden Lion for best artist under 35 from the 51st Venice Biennale, and the Prince Claus Award from the Netherlands. Galindo’s work is included in numerous collections including the Centre Georges Pompidou, Paris; Solomon R. Guggenheim Museum, New York; and Castello di Rivoli Museum of Contemporary Art, Turin, Italy; among others. Her work has been exhibited in group shows at world class museums including the Tate Modern, London, and alongside artists like Tania Bruguera and Janine Antoni at MoMA PS1. She has been widely exhibited in solo and group exhibitions including Sharjah Biennial, United Arab Emirates; Havana Biennial, Cuba; Moscow Biennale, Russia; Cuenca Biennial, Spain, and multiple times at the Venice Biennale, Italy.

Much of Galindo’s work strives to acknowledge the thirty-six years of civil war her country endured while looking forward to a more peaceful and productive future. In her most celebrated work, Who Can Erase the Footprints? (Quién puede borrar las huellas?) 2013, she walked barefoot through the streets of Guatemala City, from one government building to another, carrying a basin filled with human blood into which she periodically dipped her feet. The trail of footprints made visual her reaction to the news that Efraín Ríos Montt, a former military dictator responsible for the most destructive period of the country’s internal conflict, had been permitted to run for president despite constitutional prohibitions. Galindo’s body-based practice is reflected in works like Bitch (Perra), in which she carved the word into her thigh with a knife, or Hymenoplasty in which she underwent surgery to rebuild her hymen. Her work often challenges the ways that women are objectified in Guatemala.

Northern Illinois University is bringing Regina José Galindo to the US as part of an exhibition called (Re)Presenting Guatemala, January 17 – February 24, 2017. It includes an artist talk and poetry reading by Galindo on February 1st in DeKalb, Illinois.

This work is made possible with the support of Northern Illinois University College of Visual and Performing Art, and The School of the Art Institute of Chicago Department of Performance and Department of Fiber and Material Studies. 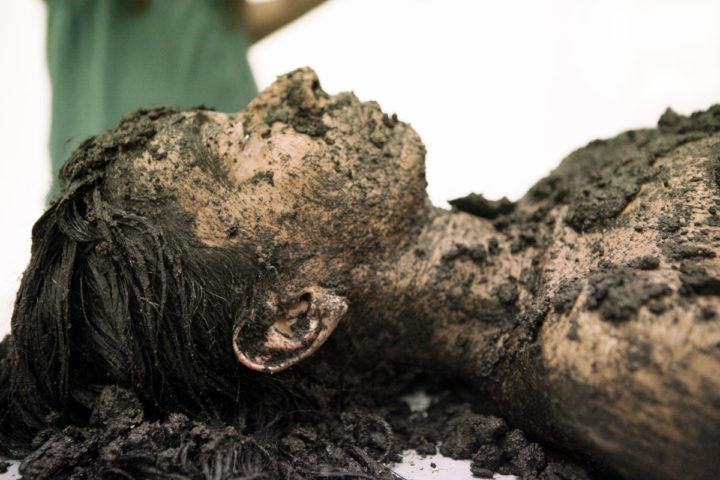