On view through Saturday, March 4th

Ryan Fenchel’s new body of work, The Adept Wept, combines two threads of his recent practice, paintings and light boxes. Developed from an intuitive studio practice, the vessel-like shapes that appear in the paintings provide an expressive outlet for a variety of formal ideas situated within conceptual constructs. The light boxes on view borrow their structural and graphic format from Japanese bar signs while originating form the same world as the visually textured paintings.

Influenced by alchemy (the adept), mythologies, secret societies, art histories, and modernism, Fenchel’s work is a cosmos without hierarchy. Familiar three-dimensional objects rendered in two dimensions engender a template for mark-making: from the abstract, to the portrait, the anthropomorphized and singular opaque colors. It is endlessly generative, and encourages open questions and interpretations.

The painting that lends its name to the show title, Refreshing Memories, The Adept Wept, features four shapes – one spaced slightly away from the rest. The shapes resemble vessels, but the familiar properties of vessels ends at the shapes. One a pitcher, one a vase, one bending like a figure, and one flattened by an Egyptian landscape – the Sphinx in the foreground as a testament to objects familiar yet mysterious. Several mural–sized paintings, ranging from 8 to 13 feet long, emphasize the concept of volume literally and figuratively. Weight, movement and space parry with the use of color, form and shape to underline the atmosphere in the individual paintings as well as the cumulative effect in the gallery as a whole. 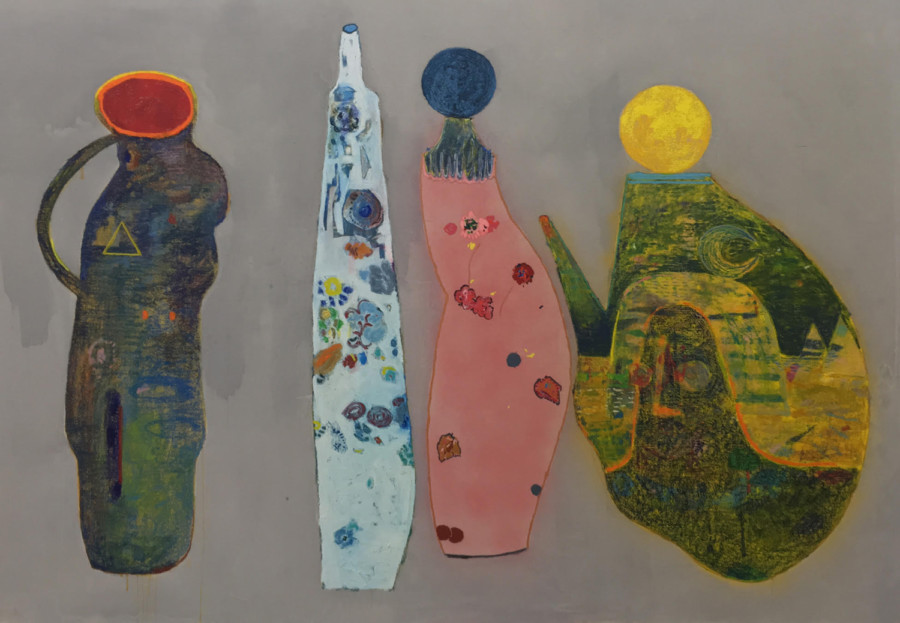