Defibrillator Gallery was formed in 2010 as a platform for performance art and on January 28th we mark the end of our sixth year with a benefit celebration featuring a performance by guest of honor, JoJo Baby. A legend in Chicago club culture, Jojo Baby’s unique style transcends drag by taking a sculptural approach to figurative transformation, sometimes setting aside standard ideas of beauty to achieve looks that are abstract, witty, and complex. He is often considered Chicago’s version of Leigh Bowery.

“Some people consider me one of the original Chicago club kids,” JoJo says. He grew up in Logan Square with three younger brothers, their Greek immigrant father, and their Lakota Indian mother, who was a Bunny at the Chicago Playboy Club in the 60s. JoJo remembers watching her “put on makeup and go from plain Jane to super vixen.”

Jojo Baby is best known in Chicago for hosting the legendary Monday-night dance party, Boom Boom Room. Began in 1991, Boom Boom was originally hosted by Jojo Baby and Silky Jumbo at Red Dog in Wicker Park. The party moved to Green Dolphin where it was hosted by Jojo Baby and Sal-E for several years before dissolving in 2015. Jojo now works the door at SmartBar’s Queen! on Sundays and other hot parties around town.

JoJo has had many brushes with celebrity. A documentary film produced by Clive Barker (titled, Jojo Baby) chronicles the day-to-day life of the creative man behind the magical personas. During the Bulls’ dynasty years, he did Dennis Rodman’s notorious leopard-spot and camouflage dye jobs. He appeared on multiple episodes of Jenny Jones and had an uncredited bit part in Party Monster, the 2003 biopic starring Macaulay Culkin as homicidal New York club kid Michael Alig.

JoJo’s Closet, a collection of his puppets and objects began in an actual broom closet at No Hope No Fear Tattoo in the Flat Iron building. Eventually he moved into his own space. Jojo’s Closet is a living installation, constantly shifting, and constantly on display. Jojo’s sculptural practice includes doll making, a passion inspired by his friend and mentor, Greer Lankton, who worked in Andy Warhol’s Factory and for Jim Henson and the Muppets. Often having real human teeth, his morbidly sweet dolls are meticulously stitched.

Getting Into Face is a book by photographer Bernard Colbert that documents a long term collaboration between JoJo Baby and Sal-E as they prepared for their Monday night appearances at Boom Boom Room. The five-year weekly photo project captured these Chicago icons renowned for using their bodies as canvases to become masterfully executed conceptual characters. 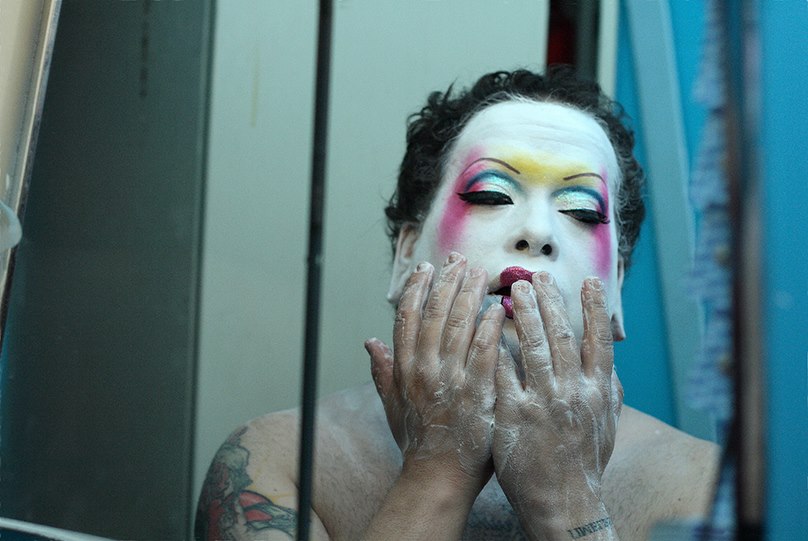