On view through Friday, January 6th

Timed to coincide with the closing of Future Present, the most comprehensive Moholy-Nagy exhibition ever presented at the Art Institute of Chicago, this performance investigates the legacy of Moholy-Nagy, its relevance for late modern and contemporary experimental music.

This special celebratory event dedicated to the spirit of avant-garde and the fusion of contemporary art forms is free with RSVP thanks to generous sponsors. Please make sure to reserve your seat in time.

This unique, rare concert presents a unique overview of the Hungarian electronic classical music scene that carried the torch of experimentation and innovation in the repressive decades of state socialism in the 1960s and 1970s, building a spiritual bridge between Moholy-Nagy’s avant-garde experimentalism and the freedom for artistic self-expression brought about by regime change and the end of socialism in 1989. The musical performance event Moment’s Notice is also an instance of artists from various universes of contemporary music coming together to create contemporary music in the spirit of John Cage’s definition, that exists only in the here and now. Each performance is unique yet they are united by the desire to create a link between Moholy-Nagy’s ideas and legacy, the electroacoustic revolution in music of the Cold War era that miraculously transcended the Iron Curtain and the contemporary music they are creating on stage during each performance.

Accordingly, Moment’s Notice is an amalgamation of visual arts, including an optoacoustic sign language projected to the audience, the presentation of five electroacoustic pieces by Hungarian composers and four improvisations by the three musical collaborators, trombonist László Gőz, electronic sound artist György Kurtág jr. and cimbalom player Miklós Lukács. The trio is thus made up of three radically different artists, whose joint efforts represent a special meeting of contemporary artistic sensibilities. Gőz is a stalwart of Hungarian neo-avant-garde music, a great jazz trombone player teaming up with Kurtág, a new music composer and researcher at SCRIME LabRi at Bordeaux University, as well as crossover sensation Miklós Lukács, whose groundbreaking work spanning two decades has opened vast new experimental and contemporary musical horizons for the cimbalom (hammered dulcimer), a traditional folk instrument.

The audiences are welcomed to the event by György Ligeti’s Artikulation, composed in 1958 in Cologne, then the epicentre of the emergent German electroacoustic movement, accompanied by a projection of graphic artist Rainer Wehinger’s 1970 “visualized sheet music” for the piece. Moving on, the musicians launch into an improvisation, departing from Ligeti’s piece as the projection shifts to a live optoacoustic visualisation: the notes and sounds from the stage are translated into optical signs in real time, conjuring up the visual universe of László Moholy-Nagy. This duality of the visual and the acoustic is upheld throughout the performance, as composed pieces are accompanied by animated sequences and improvisations by real-time animation with the aid of a computer program developed for this performance. This is the United States debut of this event that is set to take place only once more after the Chicago premiere, at the Los Angeles County Museum of Art in May 2017. 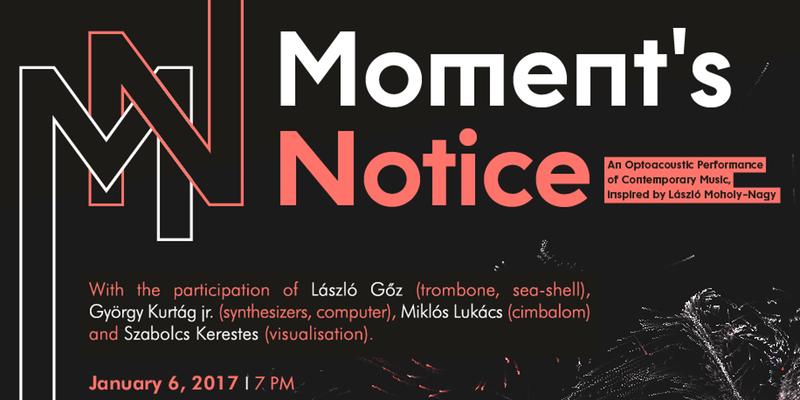