On view through Friday, February 10th

In light of this newer and sleeker culture, our natural environment seems increasingly alien. We have developed new technologies specifically for interacting with out environment. In this body of work, I traveled to the Bay of Fundy to film a series of brief performative videos evoking the effects of contemporary technological progress on mankind’s perspective of life on earth, specifically in light of natural phenomenon. Located on the Canadian Atlantic coast, the Bay of Fundy has the highest vertical tides in the world. Repetition is an important device in this body of work. In each video, I wear a silver skin suit in an attempt to illustrate my own physical separation from nature. The repeated uniform is mean to stand as a layer between the land and myself. It serves to contextualize the performer in the environment. The silver suit is present in an effort to deny my own essence, to appear sleeker than I actually am. For this project, I was chiefly interested in metallic pigments. The Bay of Fundy has a color palette of its own. I was interested in competing with this. The color silver has a feminine energy, it is related to the moon, the ebb and flow of the tides-it is fluid, emotional, sensitive, and mysterious. Silver has also taken on a new, more industrial context in contemporary society. And here lies the incredible paradox.
The title of this body of work, The Silver Screen, is relevant in more than one way. Silver, hierarchically is one of the most important elements of this collection. The idea of silver as a conceptual camouflage in contemporary technological society was important, but even more important was how it functioned visually: silver was not camouflage within the literal environment. Visually, silver was doing something much different. I wanted the suit to act as a physical barrier between the environment and myself- a “screen”. The term “the silver screen” was originally made popular in the times of early motion pictures. The term connotes film as an industry, the conscious progressive and industrial nature of all things in the hands of mankind. 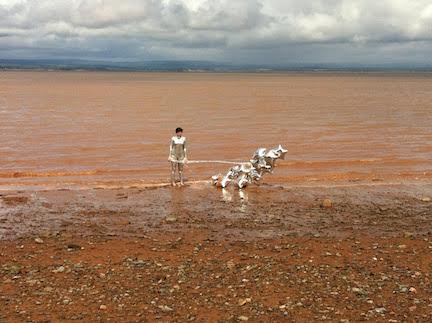