@ Graham Foundation for Advanced Studies in the Fine Arts Founded

On view through Saturday, February 4th

The Graham Foundation is pleased to debut the world premiere of Kjell Theøry by the experimental artist collective, ATOM-r (Anatomical Theatres of Mixed Reality). The performance is the culmination of a multi-year project by the group and joint residencies at the Graham Foundation and the International Museum of Surgical Science (IMSS). Presented in the historic Graham Foundation ballroom, the immersive, multimedia performances will take place over three weekends between January 20–February 4, 2017. Given the intimate scale of the presentation, seating for each performance is limited.

Performances will take place at 7PM on the following dates:

Tickets are $15 each ($12 for students). Proceeds directly benefit ATOM-r.

Kjell Theøry is an Augmented Reality performance juxtaposing the writings of Alan Turing—a gay twentieth century computing pioneer—about pattern and shape in the natural world with algorithmic mutations of Guillaume Apollinaire’s 1917 play The Breasts of Tiresias, a gender fluid spectacle for which the playwright invented the word “surrealism.” The performance considers the last two years of Turing’s life wherein he expanded his focus to include biology while seeking asylum and tolerance in Scandinavia following his prosecution for crimes of indecency in the United Kingdom. Turing named his theory of morphogenesis—the autonomous generation of flowers and other natural forms—for a Norwegian love interest, Kjell.

In Kjell Theøry, ATOM-r draws on Turing’s theory, turning it into a poetic and choreographic system to blur the boundaries between the binaries of physical and virtual space, past and future, male and female, and human and machine. The collective’s process creates a deeply entangled and fertile exchange between the live body and ubiquitously distributed data-driven systems. A project-specific ecology of source material is translated as movement, visualized on screens, and mapped onto bodies and geo-physical space through locative and computer-vision based augmented reality. The performance uses coded systems and augmentation to create a liminal theatre evolved in relation to the Graham Foundation’s specific spatial context. While the work is inherently variable, it is experienced as a tightly constrained, yet flexible, information pattern that allows for close attention, emergence, and interruption.

The Graham Foundation residency program invites practitioners working in a wide range of disciplines to directly engage the physical spaces of the Foundation’s historic Madlener House. Residencies encourage and expand the discourse around architecture by providing resources and opportunities for collaboration within the Graham Foundation community. ATOM-r’s residency began in September 2016 in collaboration with IMSS, where the group simultaneously developed an exhibition entitled Kjell Theøry: Prologue. The exhibition at IMSS will run from January 20–February 26, 2017.

ATOM-r (Anatomical Theatres of Mixed Reality) is a provisional collective exploring forensics, anatomy, and twenty-first century embodiment through performance, language, and emerging technologies. The work is interdisciplinary and evolves through large-scale projects with long durations of research and practice that generate outputs across a range of platforms including Internet art, augmented reality, site specific installation, choreographed movement, books, and objects.

ATOM-r was conceived in response to the historical architecture of early modern anatomical theaters, spaces designed for viewing human dissections and early surgical procedures. This physical and conceptual arrangement is used as a symbol throughout their work to explore histories and experiences of the body, sexuality, and prosthesis.

ATOM-r is supported by a joint residency at the International Museum of Surgical Science and the Graham Foundation for Advanced Studies in the Fine Arts, with additional support from The School of the Art Institute of Chicago. 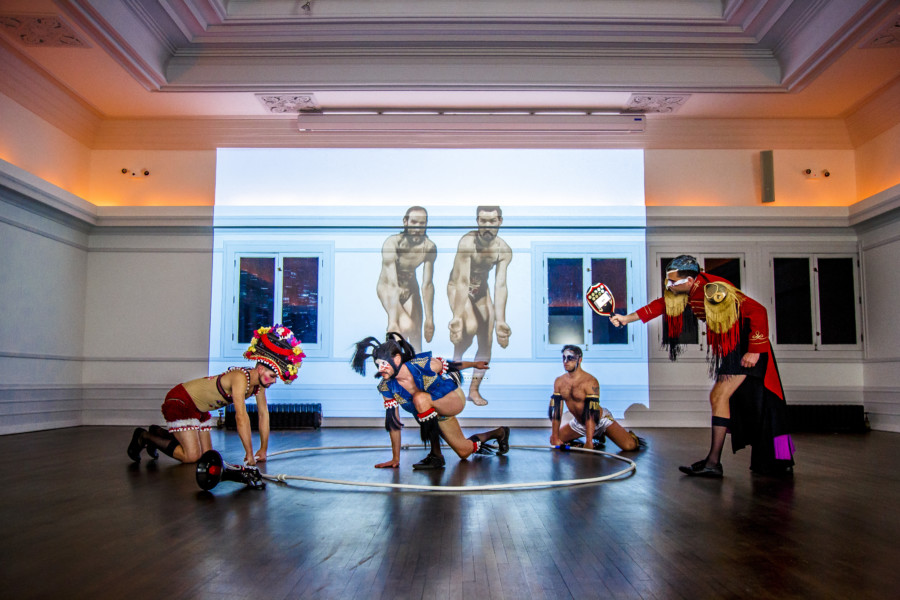