DAN GLEASON was born to live for a thousand years. He is guardian of the door, ruler of the triple universe, and lord of the mountain with blazing golden peaks that outshine the light of the sun. Dan Gleason’s anger takes the form of a mighty, four-headed lion- he is slayer of the three-eyed buffalo demon and has ridden the horse swift as thought and the great king of serpents. His phallus is a dangerous weapon. All men have Dan Gleason as their soul. He bears the mark of the lotus and drinks sacred ambrosia. To put it plainly Dan Gleason is the shit.

LYRA HILL is a cartoonist, filmmaker, and performer who often combines media to create immersive and transformative audience experiences. She manifested the performative-comix reading series Brain Frame between 2011 and 2014. Lyra is the Best Urban Ritualist in Chicago according to NewCity magazine.

MAX MORRIS is a cartoonist and curator. He co-runs the event space Learning Machine in Bridgeport. His work has been seen in anthologies such as Linework, Weird Magazine, Lumpen Magazine, and Corpus Corpus. His library is way better than Brad Rohloff’s.

SARAH FERRICK b. 1988 on Long Island, now in Chicago, author of Yours, published by 2dcloud.

ISABELLA ROTMAN is a cartoonist and snake-person from Maine living and drawing in Chicago. Her art is usually about the ocean, mermaids, crushing loneliness, people in the woods, or sex.

A SPECIAL READING BY “CHRIS WARE”
Chris Ware’s 1967 magazine “The New Yorker”, in Omaha, Nebraska, was born, he was appointed as a comic artist. Memory plays a role in government to reflect the complexity of the graphic novel of the story to tell the people in the district Midwest suburb. Ware many -Quimby mouse, rust brown and Jimmy Corrigan, usually in serial form first appears, in this release, “New York Times”, “The Guardian” or the health of their own ongoing comic “novel tip Library”, they separate and independent releases before.

It’s been one year and a lot has changed. You’ve changed, we’ve changed. This reading is now 1 years old. One thing that hasn’t changed is that this shit is JUST FIVE BUCKS. Guests receive free screenprinted poster and a small present. 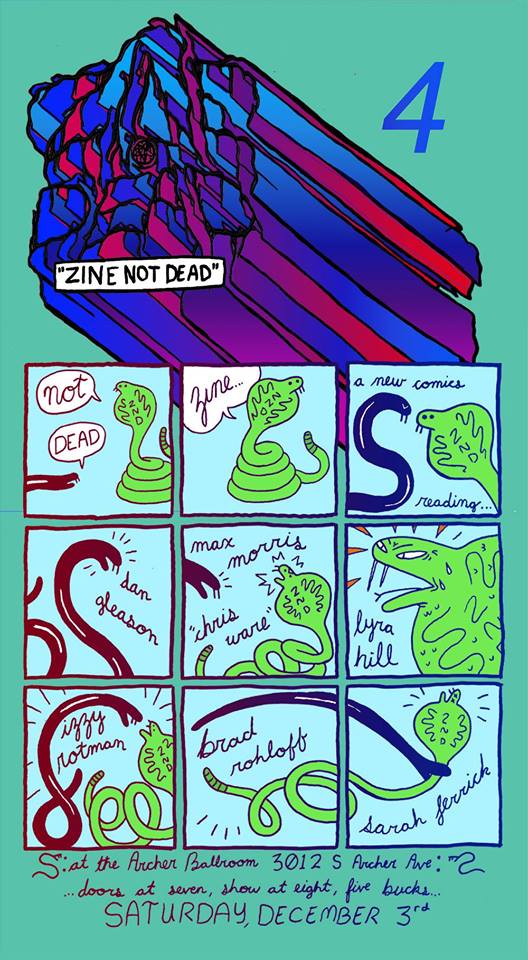