ARTSPACE 8 is pleased to welcome Scotty GoGo to his first solo exhibition with the gallery. “I Invented the Silent Disco,” his immersive, site-specific installation can be viewed on Friday December the 16th from 8pm until midnight. The opening will see Scotty occupy a converted office space called “Above Gucci.” Here, the artist will present a series of neon and LED light sculptures, in whose forms and movements can be found a pared-down version of go-go dancing which reveals the art form’s underlying, universal language and symbolism. The installation itself will occur alongside an electronic music set by DJ Czboogie, DJ and founder of 5 Magazine, a Chicago-based house music journal.

Scotty is inspired by functional and commercial objects and spaces. He celebrates mass-produced elements of our every-day environment that are often overlooked, despite the careful decision-making and design inherent in their creation. Scotty reimagines this particular commercial space, inhabiting it with his installation in order to bring to the surface a soulfulness and humanity that exists within all things man-made. He makes the distinct choice to utilize neon as the centerpiece of his installation because of the familiarity of the material due to its employment in commercial signage, as well as its characteristically attention-grabbing artificial glow.

SCOTTY GOGO works primarily in installation, performance, and new media. Since receiving his BFA from the School of the Art Institute of Chicago, as well as an MFA in Spatial Art and an MFA in Digital Media Art from San Jose University, Scotty has exhibited internationally, including at the Tech Museum of Innovation and ZERO1 in San Jose, Twitter Headquarters and the de Young Museum in San Francisco, ARQ in Sydney, Australia, and the Edinburgh College of Art in Scotland. He has led artist talks at the School of the Art Institute of Chicago, the University of Edinburgh, and Apple.

Tags: ARTSPACE8, Chicago, I Invented the Silent Disco, Near North Side, ScottyGoGo 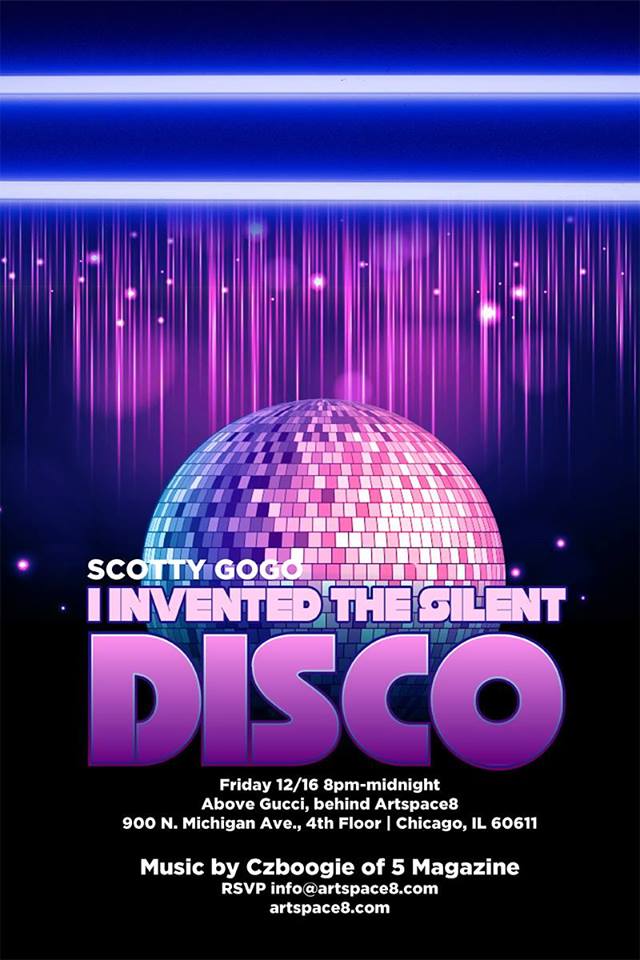