With a widely acknowledged critical deficit in the approach to the popular, mainstream understanding of dance and movement studies, it’s time to examine the options. Just this year, Atlantic magazine boldly announced “The Death of the American Dance Critic,” citing the dearth of coverage and the progressively anemic list of dance critics, writers and reporters at publications of all sizes.

Reflecting on the article in Dance Magazine, critic Kristin Schwab wrote that what the Atlantic article didn’t exactly address was “the fact that criticism is dying across many forms. Newspapers are doing away with book reviews, classical music reviews, theatre reviews—the list continues.” Both publications seem to agree that, as the Atlantic noted, “pop culture has superseded high culture as the locus of critical discussion.” Given press and publishing outlets’ adaptations to the advent of online media, as well as a concurrent rise in class disparities (and their attendant cultural biases), a disproportionate degree of funding support now simply goes to the largest, most visible, already-wealthiest productions, this may all have the air of inevitability. So, given this state of things, it begs the question whether the art form is doomed to become just another “item in the experiential supermarket, a thoughtless art without memory?” or whether something can actually be done about it.

We invite members of Chicago dance community to come participate in an evening of creative convergence between members of the dance community, including dancers, critics and others, to discuss ways of nurturing this critical apparatus back to health. Presenting a panel of the city’s local critics, moderated by Workman, we will lead a conversation on and speculate as to potential directions for writing about the form.

Following the panel, in the spirit of Merce Cunningham’s online weekly Monday discussions, we will launch the Movement Matters monthly online conversation about dance, performance art, criticism, and more; Movement Matters is also a new Sixty Inches From Center column space at the intersection of dance, performance, politics, policy and issues related to the body as the locus of these and related socio-cultural dialogues on race, gender, ability and more. Each month’s columns will serve as the jumping-off point for these discussions.

This open forum will provide a place to engage in an ongoing dialogue about dance, its makers, formal concerns, histories, contemporary interests, and as a meeting place for advancing and expanding thought about the form. Conversations will be recorded and archived on the Movement Matters Facebook page.

Sharon Hoyer
Sharon Hoyer is the dance editor of Newcity Magazine. She has been writing about dance for ten years and loving it since she could walk. She feels honored to be a proponent of Chicago’s vibrant and growing dance scene.

Michelle Kranicke
Michelle Kranicke is the artistic director of Zephyr Dance, the experimental dance company she founded in 1990. Most recently Michelle was awarded a 10-week residency at Defibrillator Gallery where she developed Valise 13, a co-production between Zephyr and Defibrillator, to premiere in fall 2016. Michelle was an artistic associate and curatorial resident at Links Hall for their 2015-16 season. During that time she conceived, curated and co-presented The aMID Festival, a 9-day festival celebrating the underserved performative body of the experienced artist and challenging commonly held views regarding the age of a dancer. For more information about Michelle and Zephyr’s work please visit zephyrdance.com.

Laura Molzahn
Laura Molzahn has written about dance since 1987, beginning at the Chicago Reader; she’s since written for Dance Magazine, Pointe Magazine, SeeChicagoDance, the WBEZ website and Chicago Magazine. Since 2013, she’s covered dance for the Chicago Tribune. The winner of two Peter Lisagor awards for her dance and theater writing, she has a PhD in English from Northwestern University. She’s been taking dance since the age of 30 and continues as best she can.

Lauren Warnecke
Lauren Warnecke is a freelance writer based in Chicago, IL. As a cultural critic and dance writer, Lauren is a regular contributor to SeeChicagoDance.com, Windy City Times, and Chicago Magazine. She is the founder of the blog Art Intercepts and has written about dance technique and pedagogy, exercise science, qualitative research methods and higher education for print and online media. Lauren has generated courses and curricula for universities, professional and pre-professional organizations; presented at national and international conferences; and managed extracurricular arts programs for youth and adults in the non-profit sector. She is an adjunct faculty member at Loyola University Chicago and holds degrees in dance and kinesiology.

Zachary Whittenberg
Zachary Whittenburg spent ten years as a professional dancer with companies including Hubbard Street Dance Chicago, Les Ballets Jazz de Montréal, Pacific Northwest Ballet and North Carolina Dance Theatre (now Charlotte Ballet), in addition to freelance work with, among others, Lucky Plush Productions, Same Planet Different World and Molly Shanahan / Mad Shak, plus choreography and teaching. Dance Editor at Time Out Chicago from 2009–12, Whittenburg has written for numerous print and online publications, contributes regularly to Dance Magazine, is a panelist and guest speaker, and tweets @trailerpilot about contemporary culture and the performing arts. Now Associate Director of Marketing and Communication at Hubbard Street, he represents the company on the Chicago Dancemakers Forum consortium, is a member of the executive committee for the Chicago Dance History Project, chairs the marketing committee for DANCE FOR LIFE CHICAGO, and serves on the artistic advisory council for High Concept Laboratories.

Michael Workman
Michael Workman is an artist, writer, dance, performance art and sociocultural critic, theorist, dramaturge, choreographer, reporter, poet, novelist and curator of numerous art, literary and theatrical productions over the years. In addition to his work at The Guardian US, Newcity, Sixty and elsewhere, Workman has also served as a reporter for WBEZ Chicago Public Radio, and as Chicago correspondent for Italian art magazine Flash Art. He is also Director of Bridge a Chicago-based 501 c (3) publishing and programming organization. You can follow his daily antics on Facebook. 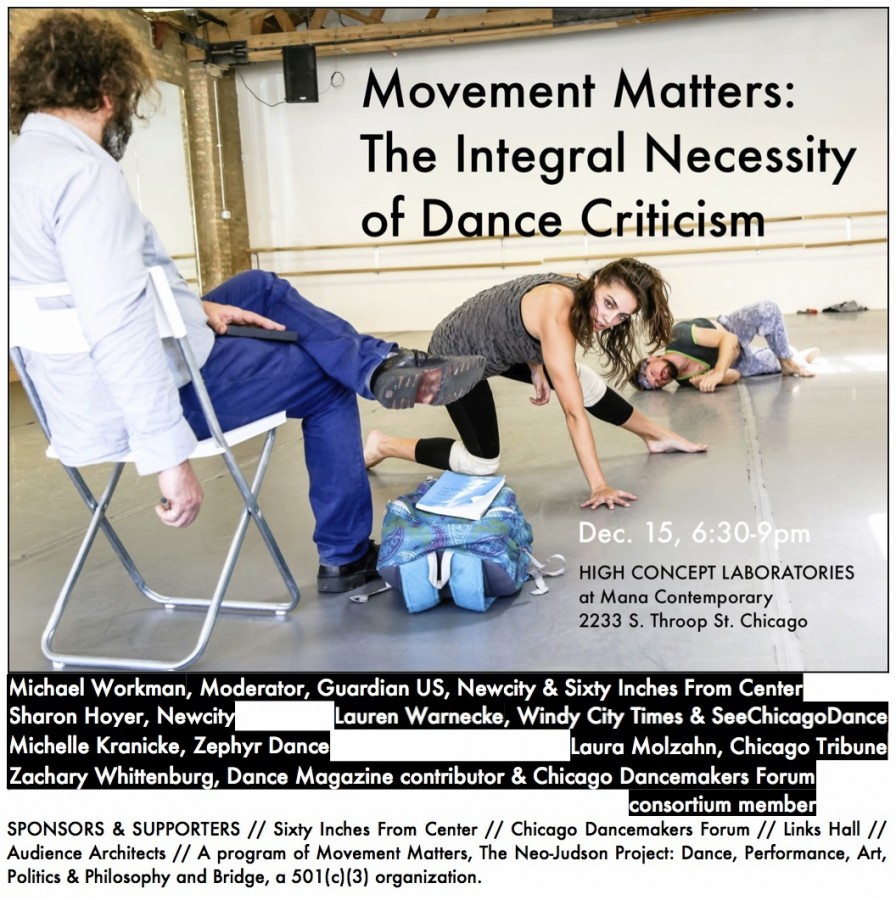