Joe Gioia: You Push the Button and We Do the Rest

Long before camera phones, picture-taking was made easy through the efforts of one man, George Eastman, and snapshots became the main product of his remarkable company, Eastman Kodak. An able chemist, a visionary businessman, and a marketing genius, Eastman brought photography to the masses. A predicted fad, his cameras and films quickly became a fundamental part of millions of lives as Kodak defined amateur and professional photography for the next century. In his talk, Joe Gioia reviews Eastman’s little-known life and work, paying special attention to the technological advances and business innovations he employed to make photography available to everyone.

Joe Gioia was born in Rochester, New York and spent many happy hours at the George Eastman House museum of photography before going away to school. During his illustrious career, Mr. Gioia has been Senior Editor of Modern Photography magazine and a contributing editor at American Photo magazine. He has also written about photography for PDN, Lens on Campus, Salon and the New York Times. His photographs are included in the Polaroid Corporation Collection, now housed at the Westlicht Gallerie in Vienna, Austria, and at the Minnesota Historical Society in St. Paul, Minnesota. His work can also be seen online at www.visiblerepublic.com.

Tags: Eastman Kodak, Evanston, Joe Gioia, Perspective Gallery, You Push the Button and We Do the Rest 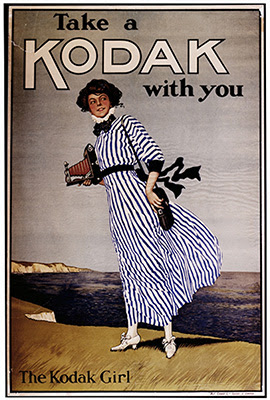