In his new work, Wandering, Christopher Schneberger is embracing the flat expansive farmscapes of the Midwest and introducing a hint of personal narrative. In this series, Schneberger explains that his images “juxtapose the extremes of impersonal bleakness and personal introspection; the vastness of snow laced plains and the tiny individual within that space; coldness and warmth. There is a mystery in the work. But I hope to raises questions, beyond the reasons for the figure’s presence, about what it means to be leaving one place for another.”

David Velasco’s exhibit titled, Brian, is a study and documentation of Brian, whom he considers to be his younger brother. The series was shot between Glenview and Wilmette, their respective homes. In describing his work, Velasco states that “Through both portraits and environmental shots, I looked to represent the common experience that we’ve shared twelve years apart from each other. As I see a lot of myself in Brian, these photos act as both a documentation of Brian’s adolescence as well as a reflection and unification with my own.” 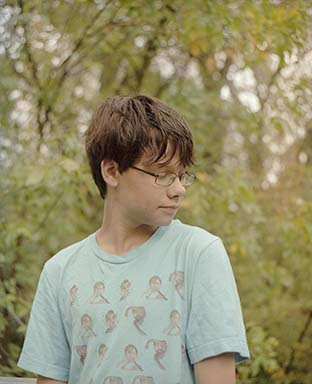