On view through Thursday, November 3rd

’Dumping Trump’ is an art-fueled awareness exposition, co-produced by gallerist Kimberly Atwood and artist Keelan McMorrow. This historically significant and timely exhibition will take place for one night only, on Thursday, November 3rd, 5pm-9pm, at Elephant Room Gallery in C.C.’s Art Garage in Bridgeport.

Presidential candidate DONALD TRUMP has finally met his match! Although according to the consortium of creatives comprising the upcoming art protest Dumping Trump, making mincemeat of “the Donald” wasn’t much of a hardship in the first place. Featuring an illustrious roster of artists and illustrators whose works have been exhibited in galleries all over the world and have appeared inside and on the covers of TIME, Rolling Stone, The New Yorker, GQ, Playboy, and Mad Magazine, Dumping Trump blurs lines of high aesthetic with poignant protest. Expect recognizable works by such award-winning artists as Jason Seiler and Steve Brodner alongside engaging conceptual works, Election Day wearables – even the odd chocolate coin-filled Trump piñata.

“We wanted to do something meaningful,” explains Chicago-based artist Keelan McMorrow, “like burning the effigy, so to speak. While none too pleased with the status quo myself, Donald Trump has espoused viewpoints and prejudices that transcend the space of acceptable politics in the 21st century.” To that end, a portion of the proceeds generated by the event will go toward scholarships for undocumented students of immigrant families in the Chicagoland area. “Running a gallery that focuses on creating a space for honest and open conversations, an exhibition like this is necessary.” adds Atwood. “It was important to us that we were not just exhibiting anti-Trump works but that we were creating a space where creators and visitors alike could come together and know that a portion of what is made that evening will go to an organization that is doing humanitarian work in Chicago. We are upset, but want to turn that into something positive.”

C.C.’s Art Garage is located at 2727 S Mary St. in Bridgeport, Chicago. Music will be provided by the Little Village/Pilsen-based collective Analog Signals and refreshments will be available. More information can be found on the gallery’s website: www.elephantroomgallery.com. 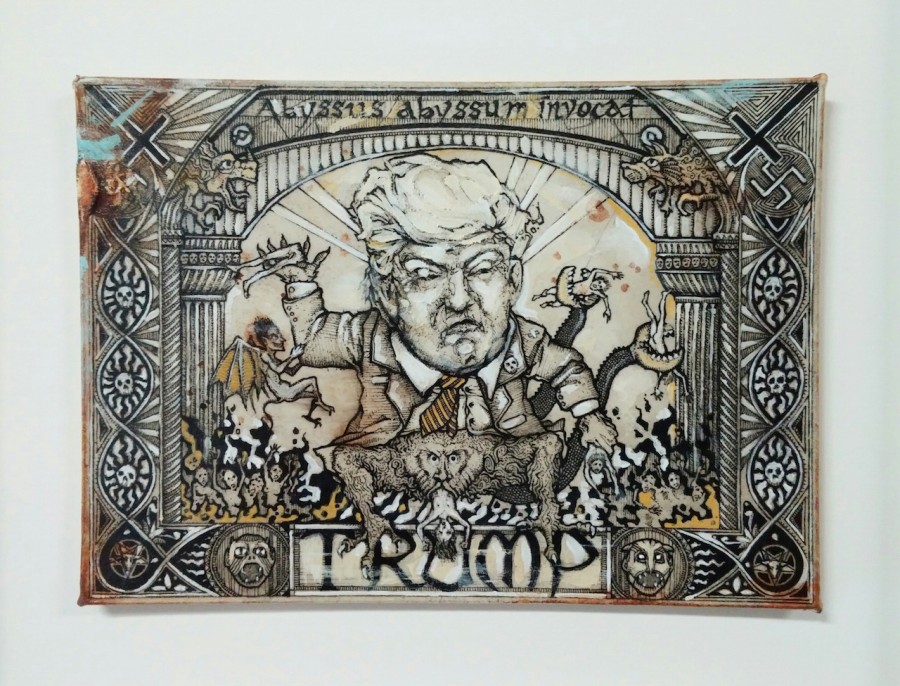