Anna Tsouhlarakis: She Made for Her

On view through Friday, January 13th

Working across a range of media, Anna Tsouhlarakis has developed an artistic practice that explores themes of Native American identity through resolutely contemporary means. With a body of work that includes sculpture, video, performance, photography, and installation, Tsouhlarakis aims to expand the terms of what constitutes Native aesthetics, pushing viewers to confront and rethink their own cultural expectations when encountering the work of Native artists.

In her 2004 video Let’s Dance!, for example, Tsouhlarakis learns and performs—each with a different partner—a series of thirty different dances ranging from the traditional (Irish step dance) to the contemporary (the Electric Slide). In the process, Tsouhlarakis (who danced competitively in her youth) humorously challenges notions of artistic mastery and technique, as well as the role that dancing bodies have historically played in perpetuating cultural stereotypes of non-Western peoples.

In recent years, the voices of others have played an important role in Tsouhlarakis’s work. For her 2012 installation Edges of the Ephemeral, at the Museum of Contemporary Native Arts in Santa Fe, Tsouhlarakis surveyed members of her own Navajo Nation about their beliefs concerning tribal stories of multiple worlds. She then wove their narratives into a spiraling installation constructed of found wood and industrially fabricated metal signs bearing such pronouncements as “This is the last world” and “Many of us will not make it. Some will be swept away, like when Water Monster went raging for her baby and took the lives of Dine people in the process.” Or, somewhat more optimistically, “Maybe we come full circle.” In 2013, Tsouhlarakis surveyed other Native Americans about their experiences living in Washington, DC, where she has been based since 2009. Their answers provided the raw material for her exhibition In Other Words: A Native Primer, where the textual accounts—variously poignant, pithy, and pedestrian, punctuated with sculptural bundles of sticks and electrical tape—filled the walls of the long, narrow gallery from floor to ceiling.

For her exhibition at the Neubauer Collegium—presented as part of the collaborative research project Open Fields—Tsouhlarakis has created a group of three new large-scale sculptures, constructed using materials sourced from the “as is” section of Swedish furniture retailer IKEA and accompanied by a multi-channel sound installation. As viewers encounter Tsouhlarakis’s sculptures, the visual experience of each works is mediated by the recorded voices of other Native women describing their experience of the same objects: some approach them as abstractions, some as utilitarian forms, and others as connections to mythic stories. Collectively, these new works question the authority bestowed upon or ascribed to both individuals and institutions, and make a compelling case for the aesthetic and epistemological contribution that contemporary Native American artists might make to the current articulation of a long-standing historical tradition.

Join us for a Director’s Lecture and panel discussion with:
Anna Tsouhlarakis (Artist),  Jacob Proctor (Curator, Neubauer Collegium for Culture and Society), Jessica Stockholder (Raymond W. and Martha Hilpert Gruner Distinguished Service Professor and Chair) Department of Visual Arts,  John U. Nef (Distinguished Service Professor at the Committee on Social Thought and in the Department of Philosophy), moderated by  Jonathan Lear (Roman Family Director, Neubauer Collegium for Culture and Society

An RSVP for the discussion is requested but not required: https://neubauercollegium.wufoo.com/forms/k1mh81y71ae01au/

About the Artist: Anna Tsouhlarakis (Navajo/Creek/Greek) was born in Lawrence, KS, and raised in Taos, NM. She received her BA in Native American Studies and Studio Art from Dartmouth College and her MFA from Yale University. The recipient of numerous awards and residencies, Tsouhlarakis he has had solo exhibitions at Flashpoint Gallery, Washington, DC; the American Indian Community Gallery, New York, NY; the Navajo Nation Museum, Window Rock, AZ; and Downtown Contemporary Art Center, Albuquerque, NM. Her work has been exhibited in galleries and museums across North America, including the Museum of Contemporary Native Arts, Santa Fe, NM; Smithsonian National Museum of the American Indian, New York, NY; Art Gallery of Ontario, Toronto; and Socrates Sculpture Park, New York, NY. In 2007–09, her work was included in the major touring exhibition Remix: New Modernities in a Post-Indian World. Tsouhlarakis lives and works in Washington, DC. 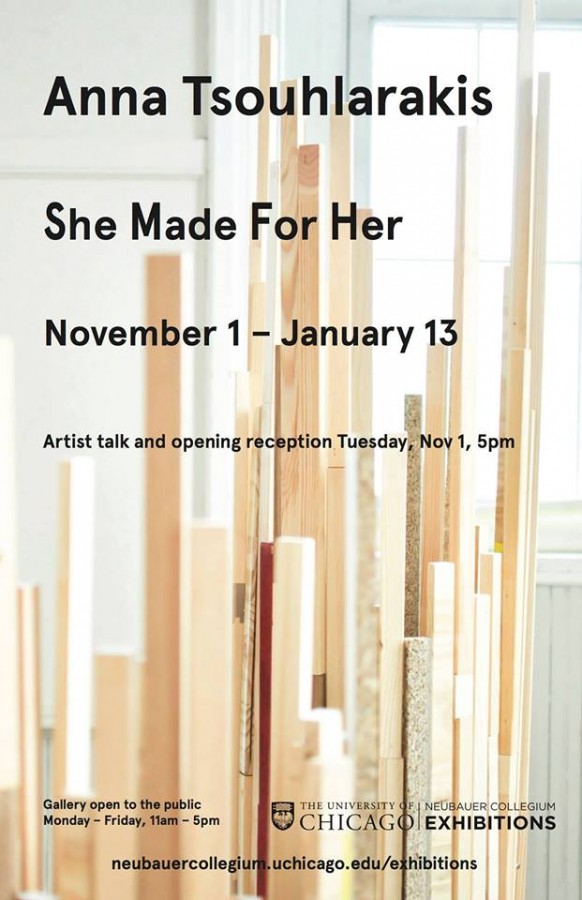