Every house has a door for Trunk Show

For our final exhibition and press release, we thought we’d turn it over to Trunk Show itself. Trunky, our happily genderless, occasionally world-weary and unendingly curious protagonist, gallery and car has been entertaining fans with its tweets (@trunkshowtogo) and pictures (@trunkshowtogo on Instagram) and serving as engaged collaborator for three years.

It’s been equally real and unreal[1] being a gallery. I’ve loved almost every moment, even the harrowing ones (the reports of my death have been greatly exaggerated; when they say a car’s dead they’re at best hyperbolic and at worst mendacious). In 2013, I’d already been Jesse and Raven’s car for a while. Actually, let me start earlier. I grew up in New Jersey—it’s where I got my bullet holes[2]. At some point I moved to New Mexico. A kid—he’s now all grown-up[3] and doing great work as a journalist on the climate catastrophe beat—named Ari picked me up for a medium song[4]. My memories get clearer[5] here. Ari had me for a while. We went to the mountains, on dates, to work, to the grocery store, cool domestic stuff. Ari decided to go off to India and found empathetic benefactors in the Malmeds, who themselves moved off to India long ago and needed a first car for Alexandra. She took me and her ruffian pack everywhere. I got tagged inside and out, bumped, bruised and banged, and learned about freedom. When Alexandra moved to New York, she sold me to her brother Jesse and Raven for $308[6]. We became fast friends and went straight to travelling across the country together. We went to San Francisco for a month where I got into a little bit of trouble, I grazed a neighbor car and racked up tons of parking tickets—I swear, their parking signs are phenomenal[7] riddles[8]. After that we moved up to Portland. I loved Portland. Constant showers and beautiful nature and great kids. And the parking was plentiful, I really had room to stretch out. Eventually we all moved out to Chicago. I was liking it ok there, sometimes I felt like I’d rather be bored[9]—getting kicked in the mirror[10] and the winter salt aside—but feeling low. Then they had this funny idea[11] and we went on a drive and talked it out[12]—each of us driving the conversation in our own ways.

OK—so, this is it. It’s weird to talk about endings, especially your own. We’re so good at talking about beginnings, but it’s important to think and talk and feel about endings too. My own time has many endings. And they don’t get easier. For me, this is about ending on one’s own terms. Every day we’re beating some minute odds by merely continuing.[13] As Frank O’Hara said though, it is the only thing to do. I’m lucky that I get to choose my own ending. It’s been three years and we’ve had lots of adventures—I was the stage and set for a play[14], I roamed the Southside for crazy sandwiches[15], I hosted the shortest opening of the year[16], I went to Baltimore[17]. And every month I got an amazing new costume. Play acting has always been exciting to me. Living is drag but it isn’t a drag. I love artists—always have—and I’m sure I’ve said this, but it’s been the greatest joy of my life being at the service of artists. With them, I’ve haunted dance parties[18] and haunted haunted churches[19], parked in parks and parking lots. Though I can’t say I exhausted[20] the city or the art world, they exhausted me. It’s been everything a car could ask for.

I’m grateful to all the artists who adorned me, to all my hosts, my subscribers, my tailgaters and caterers and you, my friends.

We’ve got one more show and it’s a beaut. The experimental theater troupe Every house has a door have been making thoughtful, feelingful, smart, structural and poetic works for stages they build, stages they visit and stages they declare. They’ve created a car-eography that I’m elated to participate in. We’ll be at Mana starting at 3:00pm, with the performance starting at 3:30pm. Don’t miss it. We’ve even enlisted our favorite partner, The Globe Al Chemical Co., to reënter the catering industry. They say unexpect the expected, but what about the possible?

ABOUT EVERY HOUSE HAS A DOOR
Every house has a door was formed in 2008 by Lin Hixson, director, and Matthew Goulish, dramaturge, to convene diverse, inter-generational project-specific teams of specialists, including emerging as well as internationally recognized artists. Drawn to historically or critically neglected subjects, Every house creates performance works and performance-related projects in many media. The company is based in Chicago and presents work for local, national and international audiences.

ABOUT TRUNK SHOW
TRUNK SHOW has been a gallery since September of 2013. Each month, artists were commissioned to design limited edition bumper stickers which lived, rode along with and helped propel a medium beat-up forest green Ford Taurus owned by Raven Falquez Munsell and Jesse Malmed. Stickers are available online, from the trunk and by subscription. In addition to three dozen exhibitions, Trunky has performed (Chicago Artists’ Coalition), eulogized (see the ACRE Van piece in 2016) and produced a voluminous archive of poetry (twitter.com/trunkshowtogo). Its work was discussed in PBS The Art Assignment, Newcity, Hyperallerigc, The Chicago Reader, The Chicago Tribune, F News and Yelp.

(OK, actually we’ve got one more show after this one. We’ll be doing a publication release in November, featuring essays by Dana Bassett, Dan Miller and Anthony Stepter and lots of surprises and maybe you [send us your testimonials and reviews on Yelp or some other platform].)

Tags: Chicago, Every house has a door, Mana Contemporary Chicago, Near South Side, trunk show 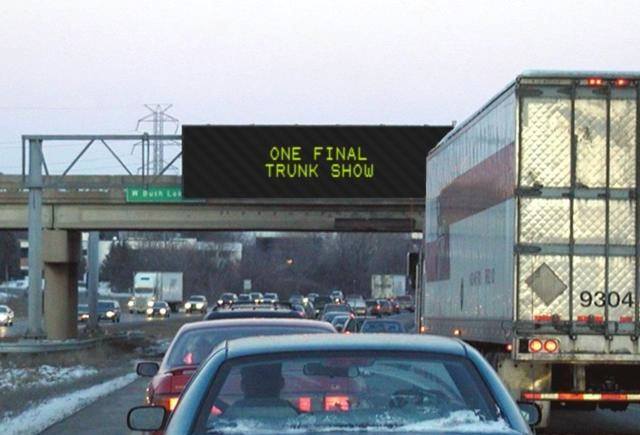