Can You Spit On Someone You Love

On view through Wednesday, November 23rd

CAN YOU SPIT ON SOMEONE YOU LOVE is a group show exploring our relationship to the performative qualities of line and the affective longings of the body through weaving, sculpture, sound, video and photography. It asks how we transform our longings into lines, and in time, our lines into longing. Photographs by Brian M. John.

Abbey Muza (1993) was born in Waukesha Wisconsin and graduated from the School of the Art Institute Chicago with her BFA in 2015. abbeymuza.com/

Anneli Henriksson (1991) was born in Santa Cruz California and currently lives and works in Chicago. She is a weaver, painter, zine-maker and musician. She graduated from the School of the Art Institute with her BFA in 2015. www.annelihenriksson.com/

Anna Orlikowska is a visual artist working in Amsterdam and Chicago. She graduated from Gerrit Rietveld Academie in Amsterdam (2013) and is holding an MFA degree from the School of the Art Institute of Chicago (2016). She was awarded with prizes and scholarships: Clare Rosen and Samuel Edes Foundation Semi-Finalist Prize for Emerging Artists (2016), Prins Bernhard Cultuurfonds (2014), as well as the New Artist Society Scholarship Award, The School of the Art Institute of Chicago (2014). The artist has been showing her work internationally including CCA Ujazdowski Castle in Warsaw and Casa do Povo in Sao Paulo.
http://www.annaorlikowska.nl/

Benjamin DeMott was born in Allentown, Pennsylvania and is an artist working and teaching in Chicago. He graduated with a BFA (2004) from Tyler School of Art and a MFA from Alfred University (2008). His studio research fuses interests in phenomenology, topics of craft, the history of ceramics in material culture, and contemporary art. DeMott has exhibited across the United States and held numerous residencies. His work is permanently installed and held in collections in Montana, Pennsylvania, and New York. He is currently assistant professor at the School of the Art Institute. benjamindemott.org/

Brian M. John was born in La Porte, TX and lives and works in Chicago. He has a BA (2013) from St. Edward’s University, Austin, Texas and a MFA from School of the Art Institute Chicago (2016). He is the recipient of a 2015-16 EAGER Grant from the Shapiro Center for Research and Collaboration (in collaboration with Joshi Radin and Linda Tegg for the research project A Program for Plants). John has exhibited in Chicago, New York and Texas and is held in the collections of the Art Institute of Chicago, Joan Flasch Artists Books, and the Bullock Texas State History Museum. He is currently a lecturer at the University of Illinois at Chicago and the School of the Art Institute. www.brianmjohn.com/

Cathy Hsiao is an artist working in Chicago. She was born in New York City and immigrated to Taiwan at the age of three and back to the US after graduating high school in Taichung, Taiwan. She holds a BA from the University of California Berkeley and a MFA from the School of the Art Institute of Chicago (2016). She has been awarded the 2016 Emerging Illinois Artists Triennial Juror Prize, curator Kelly Schindler, the New Artist Society Fellowship, School of the Art Institute (2014 – 2016), the W. Burghardt Turner Summer Study Fellowship (2012), amongst others. She has exhibited in Chicago, Los Angeles and New York. www.plantandanimalstudio.info

E. Aaron Ross is an artist living and working in the city of Chicago. A graduate from the University of Illinois at Chicago with BFA degrees in Graphic Design and Moving Image (video / film / studio art). Currently curating at the independent art space Captive Audience Screening Gallery, he may also be recognized from years past performing with Weekend Nachos, Harm’s Way, Plan of Attack, Encyclopedia Brown, Sidewalk, Meah, and Maribelle. www.eaaronross.com/

Elana Adler lives and work in Chicago. She was born in 1986 in Ann Arbor, MI, but spent most of her formidable years in and around New York City. In 2008 she received her BFA in Textiles from Rhode Island School of Design and is currently a MFA candidate in Fiber and Material Studies at School of the Art Institute of Chicago. She has exhibited in New York, Texas, Boston, California, and Rhode Island. www.elanaadler.com/

James Hapke grew up in Orange County, California. He went to Westmont College in Santa Barbara. He is now an MFA candidate in Print Media at School of the Art Institute of Chicago. www.saic.edu/media/saic/profiles/featuredstudents/printmedia/jameshapke/JAMES-HAPKE-talk.pdf

Good Lil Base is a show space, venue and studio run by Quinn Wermeling, and Ben Leach and Hersh Chabra of DROOL.
www.facebook.com/goodlilbase/
www.geocities.ws/basetapes/ 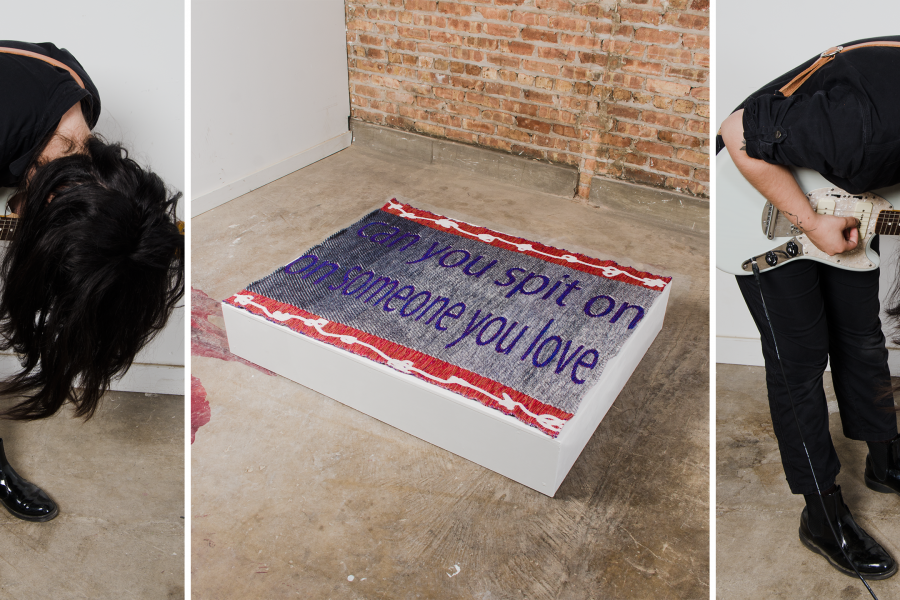