On view through Friday, March 31st

The presentation of this exhibition at the NMPRAC is the result of an alliance established in 2013 between both institutions as an initiative of MACPR’s Executive Director, Marianne Ramírez Aponte. Said initiative corresponds to a series of efforts that the MACPR has been carrying out with the goal of internationalizing Puerto Rican artistic production, broadening the institution’s range of action, connecting with the Puerto Rican diaspora in different cities, and sharing the enormous variety and richness of Puerto Rico’s natural resources.

POETIC SCIENCE: Artistic-Scientific Approximations about El Yunque is an interdisciplinary project created by the Museo de Arte Contemporáneo de Puerto Rico in alliance with the USDA Forest Service—International Institute of Tropical Forestry (IITF). The project unites art and science for the purpose of celebrating Earth and its resources, and the resources protected under the Wilderness Act enacted in 1964 in order to establish the National Wilderness Preservation System. The project commenced in March 2013, with an artistic residence in El Yunque National Forest, organized by IITF together with the Aldo Leopold Wilderness Research Institute and the Colorado Art Ranch. Said residence was the first of a series of collaborations that took place in six different ecosystems in the United States throughout 2013.

The residence that took place in Puerto Rico resulted in an innovative project that creatively depicts the value and ecosystem of El Yunque National Forest and the collaboration that took place between the invited artists and scientists from the Forest Service. Poetic Science presents the artistic and scientific projects born from that collaboration. The projects were exhibited at the MACPR in 2014 with great success, making the institution a recipient of the National Wilderness Legacy Award granted by the USDA Forest Service in 2014 for the Museum’s dedication and contribution to Wilderness Stewardship and the 2014 Best Collective Art Exhibit Award granted by the Puerto Rico Chapter of the International Association of Art Critics (AICA). The exhibition now makes its first stop in the United States at the NMPRAC in Chicago.

Marianne Ramírez-Aponte, curator of the exhibition, stated that she conceived the project and its title “Poetic Science” in relation to the oeuvre of the scientist, philosopher and poet Aldo Leopold, considered in the United States to be the father of wildlife conservation. She explained that Leopold was the first to articulate since early in the 20th century, the concept of the “land ethic”, and who formulated a new way of thinking and acting towards the land that is still greatly relevant today. For Leopold, an artist/scientist, the true substance of conservation lies, not on physical projects sponsored by the government, but within the mental processes of the people. “For that reason”, she concluded, “in addition to revising the relationship between art and science, one of the goals of this project is to precisely create awareness about the natural world and the importance of natural resources in our lives. Art and science are both the product of curiosity and awe; of the experimentation with different perspectives in order to create new forms of seeing and grasping the meaning of what surrounds us. We invite the public to initiate this personal process of exploration through the work of this group of artists and scientists that have proposed a new understanding of our Puerto Rican land.”

At the same time Dr. Grizelle González, Project Leader of the USDA Forest Service International Institute of Tropical Forestry, stated: “the Institute is proud of this innovative collaboration between the arts and science, and that local and international artists have had the opportunity to interpret the natural wonders of El Yunque National Forest using science as a tool.” Billy Ocasio, CEO of the NMPRAC also commented: “As the only Puerto Rican museum in the United States, it is an honor for us to have the opportunity to present Poetic Science through a partnership that was born two years ago. This is a valuable exhibit that will bring our community closer to one of the wonders of the world, El Yunque Rainforest. This is a beautiful and sensorial exhibit that will bring you closer to nature and the beauty of our rainforest.”

Poetic Science includes artworks in a variety of media: installation and video art, performance, and sculpture. It also presents the research projects of participating scientists, maps, and a Climate Station for the measurement of temperature, relative humidity, precipitation, the velocity and direction of the wind, and the waves of sunlight used by plants and trees for photosynthesis.

As part of the education program held in conjunction with the exhibition, on Saturday, September 10 at 11:00am, the NMPRAC will host a gallery talk with some of the participating artists and scientists and the exhibition curator.

Poetic Science will be on view until March 31, 2017. The project is made possible thanks to the support of the USDA Forest Service. The exhibition at the National Museum of Puerto Rican Arts and Culture has been made possible in part thanks to the generous support of the Joyce Foundation, The Chicago Community Trust and the collaboration of Magic Transport and Kikirikí Design.

ABOUT THE MACPR –During the past 32 years since its foundation in 1984, the MACPR has been devoted to the study, documentation, collection, preservation and promotion of the art produced since the mid-20th Century in Puerto Rico, the Caribbean and by their respective migrations. To this end it fosters an open view on contemporary art within the Puerto Rican context by advancing curatorial work and by setting up strategies that make the Museum’s cultural diversity, its exhibitions, activities, and historical building, available to all kinds of audiences.

ABOUT THE NMPRAC – The NMPRAC is the only museum dedicated to Puerto Rican art within the continental United States. Founded in 2000, the NMPRAC was designated in 2012 as one of the Museums in the Park of the city of Chicago.
ABOUT THE IITF – Headquartered in Río Piedras, Puer­to Rico, is a research and technology transfer institute dedicated to advancing tropical forestry on insular, national, and international levels, and developing and exchanging knowl­edge critical to sustaining benefits of tropical forests and grasslands. The Institute has been in continuous operation since 1939. Its staff span a wide range of knowledge and skills, including natural and social scientists, natural resource managers, education outreach and technology transfer specialists, and technicians. They integrate long-term scientific studies with applied investigation, quantitative modeling, and landscape analysis to better understand tropical forest systems and the effects of human-induced pres­sures, devise effective management and governance strategies, and promote sustainable natural resources stewardship. 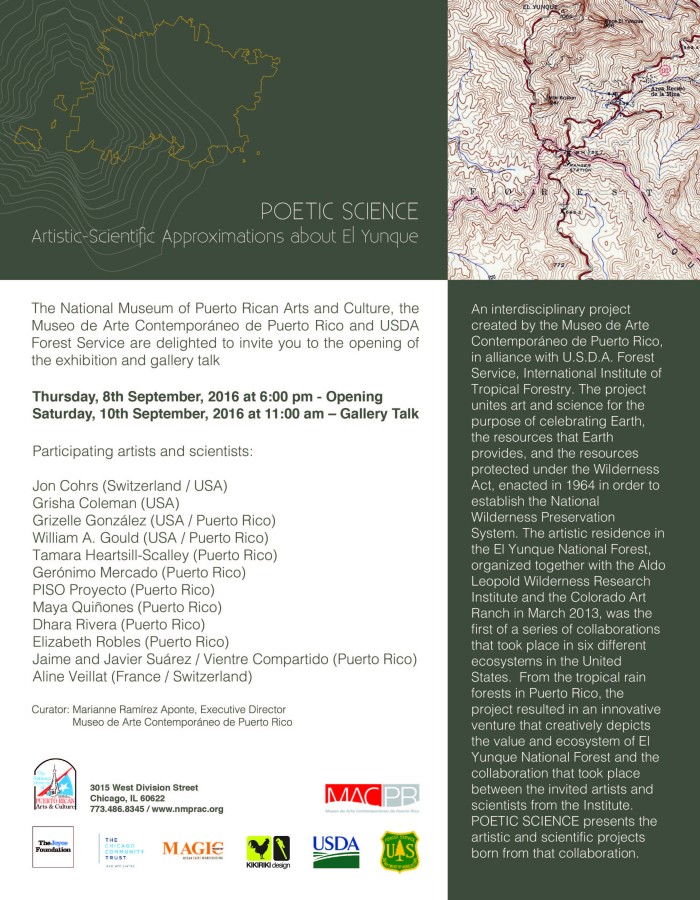