On view through Saturday, September 17th

featuring nothing by Piero Manzoni
curated by Andreas Heusser, NO SHOW MUSEUM

and a performance by
INDUSTRY OF THE ORDINARY

The NO SHOW MUSEUM is mobile exhibition space in a restored and customized European post bus (mail van), that has been shipped to America with the mission to spread nothing in the New World. This mobile museum will be parked in front of Defibrillator Gallery [1463 W Chicago Avenue] on Saturday, September 17th at 7PM, while an exhibition inside the gallery will feature the work of Italian Arte Povera artist, Piero Manzoni. Swiss conceptual artist and curator of No Show Museum, ANDREAS HEUSSER, will guide visitors through the exhibition and give an illuminating introduction (lecture performance) on the art of nothing. Chicago based INDUSTRY OF THE ORDINARY will also present a piece embracing the impossible and inspired by nothing.

NOTHING IS IMPOSSIBLE is a special No Show Museum 2016 edition presenting works which do not and cannot exist featuring contemporary artists from around the world. Following the success of last year‘s European tour with 30 exhibitions in 20 countries and a closing show at the 56th Biennale di Venezia, the NO SHOW MUSEUM is now touring America with exhibitions in art venues, galleries, public spaces, and remote areas. The 80-day exhibition tour will begin in New York, extend to Canada, and finish in Mexico. www.noshowmuseum.com, www.facebook.com/noshowmuseum

INDUSTRY OF THE ORDINARY are Adam Brooks and Mathew Wilson. Through sculpture, text, photography, video, sound, and performance, Industry of the Ordinary are dedicated to an exploration and celebration of the customary, the everyday, and the usual. Their emphasis is on challenging pejorative notions of the ordinary and, in doing so, moving beyond the quotidian. http://www.industryoftheordinary.com

The NO SHOW MUSEUM is the world’s first museum devoted to nothing and its various manifestations throughout the history of art. Its collection includes works and documents from over 120 renowned international artists of the 20th and 21st centuries exhibited in a restored and customized post bus. This mobile museum offers the opportunity to discover new regions and spaces for the contexts of nothing, and it serves as a marker to indicate any place as an exhibition area.

ANDREAS HEUSSER, is a Swiss conceptual artist and curator of No Show Museum who is mainly known for large scale projects that bridge the gap between art and activism. Using methods like parody, satire, interventions, and tactical obfuscation, he created fake organizations and corporations (including counterfeiting sites, media hoaxes and fictional characters) through imitating real corporations and political organizations. Tactics like subversive affirmation and overidentification were used to create controversy and generate media coverage in dominant media outlets. For example, in 2010, he did a counter-propaganda (OLAF) over several weeks in order to subvert a xenophobic campaign of the swiss right wing party (SVP), by creating a twin-organisation that was even more extreme in its claims – to a degree that it became ridiculous. http://www.andreasheusser.com 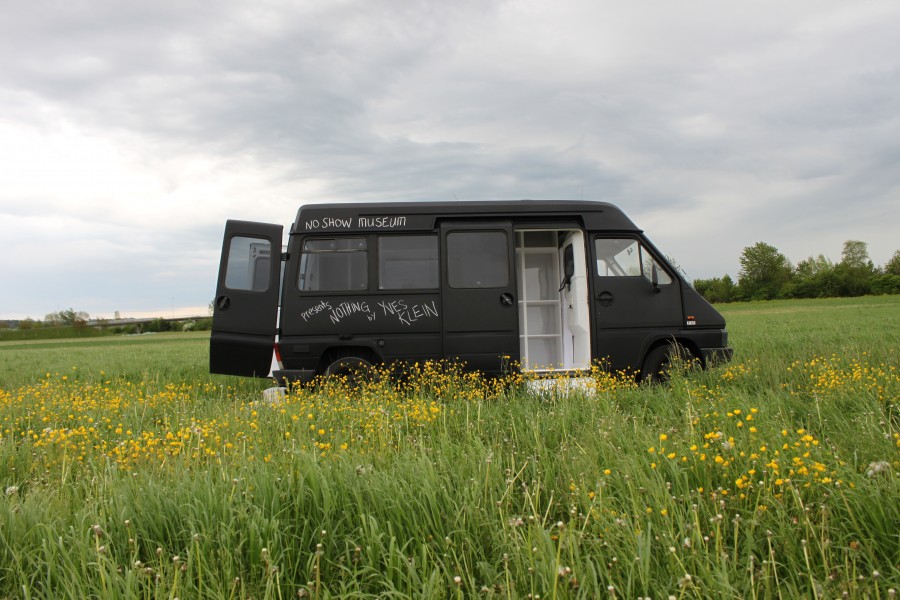