On view through Saturday, September 17th

Elephant Room Gallery is excited to be working with Kamilah Jones, the artist behind her brand, Hard Decora, for another pop-up shop this year. “Hard Decora: Colorful Attitude” will open on September 2nd with a reception from 5pm to 9pm and will run through September 17th​, featuring a closing party from noon to 5pm​. The pop up also features the work of fakegamergrl and Parasitic Tween.

Hard Decora is kawaii bad ass brand started by Kamilah Jones in 2014. The brand is heavily influenced by Japanese street fashion, Harley Quinn, and Deadpool. Kamilah explores the appeal of anti-heroes through the creation of a harajuku fashion girl gang. These characters jump back and forth between naughty and nice with incredible style. Hard Decora also makes altered toy gun props to use in your own anti-hero costumes at conventions. You won’t agree with everything they do but when you wear the clothes you will feel their unbreakable confidence, their most admirable trait.

At Hard Decora: Colorful Attitude, you will step into a technicolor clubhouse featuring work from Hard Decora, fakegamergrl, and Parasitic Tween. These artists coming together are a match made in heaven. They often ran into each other at harajuku fashion walks and anime conventions until it dawned on Kamilah that they’d be capable of creating the atmosphere she needed for her pop up. Three rebel artists rising up together had a nice ring to it. Hard Decora is the brand the characters wear. fakegamergrl creates the games they play. Parasitic Tween is the artist they rep at home. The point is to create an atmosphere filled with artwork, clothes, and decor only a girl harajuku gang, Hard Decora, would arrange.

Elephant Room Gallery is located at 704 S Wabash Ave. in the South Loop Neighborhood of Chicago. More information and open hours can be found on the gallery’s website, www.elephantroomgallery.com.

About Kamilah Jones (Hard Decora)
Kamilah Jones is an artist graduating from Columbia College Chicago and is currently working at RIPT Apparel doing t-shirt designs. Her obsession with Japanese fashion started a few years ago but she had been interested in Japanese pop culture since high school.When she isn’t at her full time job she is either working on her brand Hard Decora or making videos for the “Black Girls Are Kawaii” Youtube channel.

About Louis Hayes (Parasitic Tween)
Parasitic Tween (Louis Hayes) is a Chicago-based mixed media artist who utilizes illustration, digital animations, and puppet sculpture to depict muralistic, psychedelic worlds inspired by occult folklore, video-games, and psychological horror. His rhythmic, interlocking landscapes of pattern-drenched alien figures depict queer, alternate-reality interpretations of archaic signifiers of opulence and royalty. These mutations of archetypal figures, drawn from centuries-old esotericism and fantasy role-playing games, combine to create works that conflate perversions and taboos with religious symbology and mythological initiation rites. Sound and rhythm are an enormous influence on his compositions and his mixed-media animations take on the formal traits of experimental music videos. He hopes to continue creating larger-scale, interlocking installation works across various mediums which blur the line between performance, illustration, sculpture, and film.

About Ashley Barton (fakegamergrl)
Ashley Barton a.k.a. fakegamergrl is a queer Chicago-based illustrator and multimedia artist. Her primary subjects are fantastic alien and robot creatures or agonized femme bodies that present an alternative to normative feminine representation. She communicates these motifs of fantasy, psychology, and futurism via multidisciplinary practices including illustration. digital art, and soft sculpture. Her work draws influence from animation, video games, science/nature and mental illness. 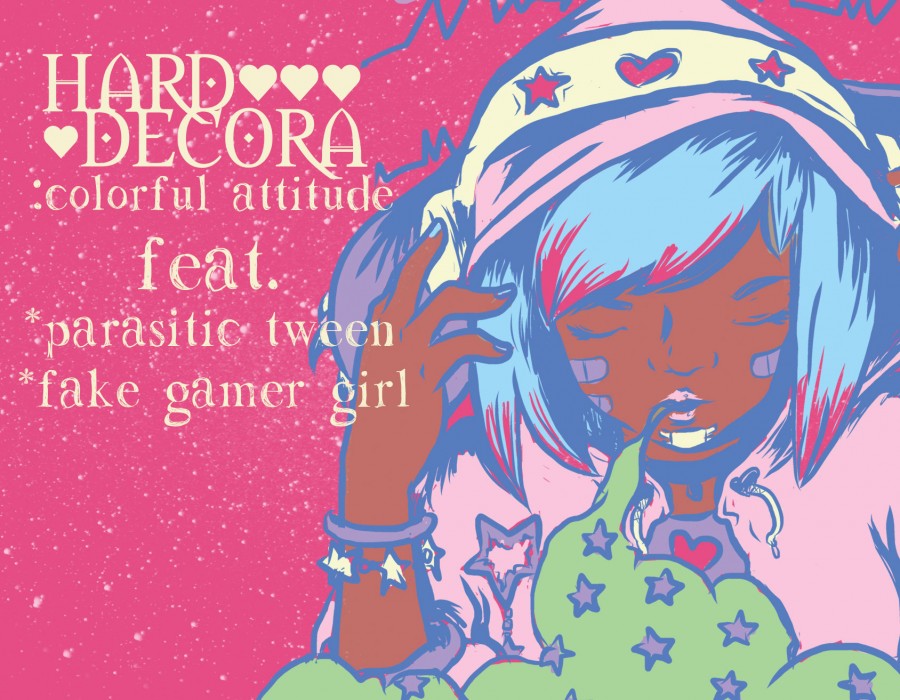