On view through Sunday, October 30th

George Kuchar (1942–2011) documented his gastronomic, meteorological, and libidinal desires in hundreds of film and video productions across four decades. An appetite for intimacy drove many of his first-person adventures, perhaps most tenderly in THE MONGRELOID (1978), a 16mm love-letter to his treasured mutt, Bocko. In nine absurd minutes, Kuchar walks the indifferent animal down memory lane, reflecting mostly on posterior matters: “How’s your operation on your behind? You had that 400 dollar operation on your tushy, remember that?”

George Kuchar: Bocko brings together a collection of work, including a never-before-seen work on paper, that celebrate one of the great loves of Kuchar’s life: his dog, Bocko. The exhibition, Kuchar’s first in Chicago, underscores the artist’s playful and loving spirit while paying homage to an unlikely muse. The works gesture toward the artist’s New York roots, his adopted home of San Francisco, and the train ride that connects them.

The opening credits of THE MONGRELOID appear against a portrait of Bocko in open-legged ecstasy on the purple linoleum of the Bronx apartment Kuchar shared with his mother. This is BOCKO (1970), a remarkable and rarely exhibited work on canvas that embodies the awe and ethereality of caring deeply for an animal. The film goes on to celebrate George and Bocko’s new life in California, where the artist accepted a teaching position at the San Francisco Art Institute in the early 1970s, and where he remained until his death. George recounts their mythical train ride west, making sure to note Bocko’s more significant bathroom breaks along the way. In Untitled (George and Bocko) (1973), a work in tempera and collage, George reads a book as Bocko regards at the snow-capped mountains out the picture window; both grin with delight at their manifest destiny.

A new digital transfer of THE MONGRELOID is made possible by the Estate of George Kuchar. BOCKO and Untitled are loaned from Mike Kuchar, along with a selection of photographic ephemera.

The exhibition is accompanied by “George and Mike Kuchar’s FURRY FAMILY,” a free film and video program at the Gene Siskel Film Center starring many of the prized (and feared) pets that inspired the work of George and his twin brother, Mike. Saturday, September 17, 2016, 12 PM. Presented in partnership with Iceberg Projects and Video Data Bank. 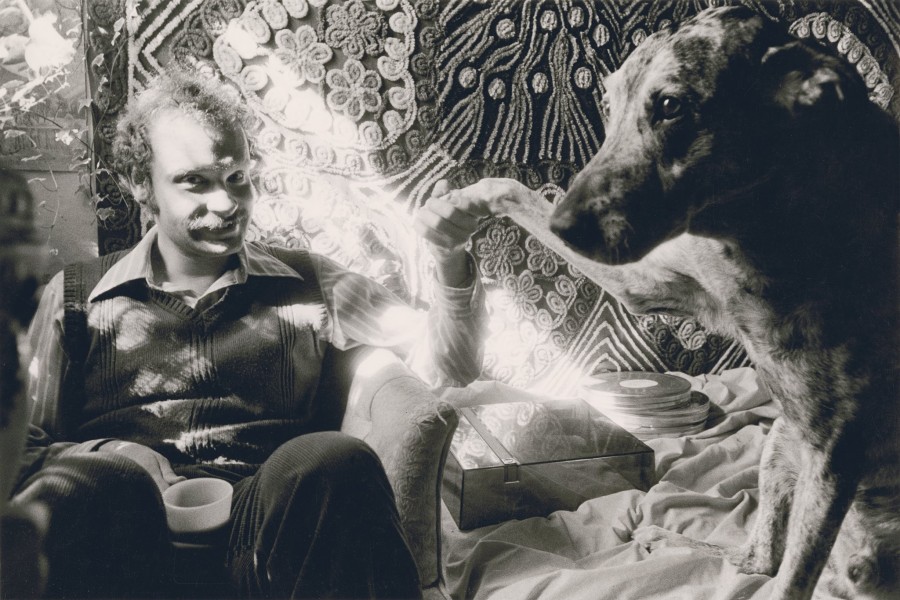