On view through Friday, October 14th

Wicker Park says goodbye to its colorful history from the Lumpen Buddy days, to the Around the Coyote art fair and now the Double Door. Everything Must Go! reflects the selling of our neighborhood and with it our art and culture. This new wave of corporate colonization is being felt all over the city with Google’s tech boom in the West loop, displacing artists and galleries.

Historically Wicker Park was home to artists. By the late 70’s artists that were gentrified out of Old Town and Lincoln Park began settling there in large numbers. As more artists came they began to transform loft space into livable studios, storefronts became galleries, music venues, coffee shops, and bars. Roberto Lopez a native and long time superintendent of the Flat Iron Building said “Wicker Park wasn’t just a place it was a state of mind.” At it’s peak was Around the Coyote that began in September of 1990, this art fair changed the cultural landscape by drawing tens of thousands of visitors–and hundreds of thousands of dollars–to the community. A victim of its own success, this new bohemia attracted economic investment. The neighborhood feared yuppies and “Lincoln Parkization.” They recalled how the visual arts industry created a real estate boom on Manhattan’s lower east side, that ended in the Tompkins Square anti-gentrification uprising of 1988. The community feared that Wicker Park’s unique ethnic and artistic diversity was at risk and that its growing popularity would lead to their displacement. “Anytime a community is discovered, the indigenous population is forced out and the new colonizers reap the benefits.” Theories of gentrification indicate that capital follows culture and identify artists as the main agents for gentrifying working class neighborhoods. Whatever pandered to the “commodification of the artist’s lifestyle in the service of a real estate market” was fair game for protest wrote the Lumpen Times in the mid 90’s. Back then anti-gentrification groups and radical neighborhood activists printed flyers and used guerrilla tactics. They sabotaged businesses by gluing their doors shut, breaking windows, and spray painting “The Natives Are Restless” and “Gentrafux”. Many people fought to keep the neighborhood but as time went on one by one they all left. The nail in the coffin came in 2012 when Wicker Park was featured by Forbes as one of the 5 hippest neighborhoods in the U.S.

Everything Must Go! speaks of the loss of authenticity and to a new era of political passiveness where people are carried by the wave. Over the past 15 years many artist and independent businesses have been priced out of Wicker Park. Heaven gallery that was established in 1998 in the Flat Iron building and in its current location for the past 16 years is one of the last stands that reflect the spirit of the old neighborhood.

Claire Molek and Heaven Gallery invite galleries and curators to rummage through works they have on hand. The exhibition is a celebration of unique producers, and recalls the collective histories of artist neighborhoods and street art fairs. Intersecting the boundaries between a clearance sale and an art fair, the exhibition further explores the magic of unknowable context, and what it means to encourage practice over product, or product over practice. 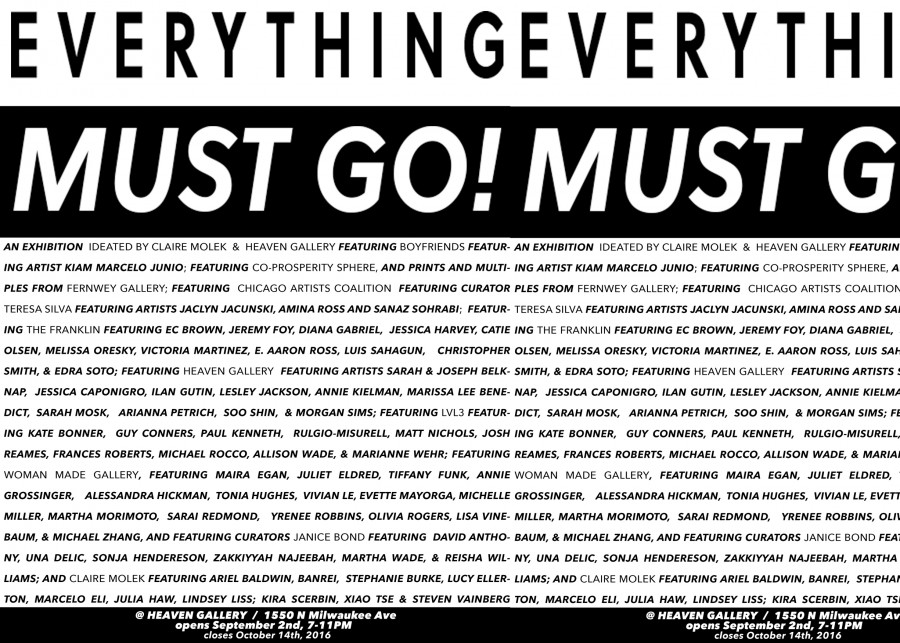