On view through Sunday, December 18th

Join VGA, the Rebuild Foundation and artist Philip Mallory Jones for the opening of Dateline: Bronzeville at the Dorchester Art + Housing Collaborative this Friday from 6-8pm.

In the first half of the 20th century, Chicago’s Bronzeville neighborhood was known as the Black Metropolis, alive with vibrant Black culture and business that flourished during the Great Migration. Highlighting this historical moment, multimedia artist Philip Mallory Jones has developed a first person mystery video game, DATELINE: Bronzeville, set in 1940 based on oral and historical documentation. This exhibition will showcase playable game vignettes, fine art prints of scenes from DATELINE: Bronzeville, and corollary historical material.

DATELINE: Bronzeville, planned for release in 2017, is a mystery adventure where the player assumes the role of Runny Walker, a seasoned photojournalist and columnist for the Chicago Advocate. The game takes place over the course of three weeks and each week the player publishes a weekly column that chronicles and critiques the spectrum of social, political, cultural, sport, entertainment and community events in Bronzeville. Through this process the player digs dangerously deeper, solving crimes and exposing corruption in Bronzeville. The player intuitively explores the fascinating world of a now-vanished Bronzeville, and interacts with numerous distinctive characters, and experiences the milieu of Chicago’s South side during The Great Migration, The Great Depression, The Chicago Renaissance, and Jim Crow Segregation, while discovering clues in order to solve several crimes and mysteries.

About the Artist: Philip Mallory Jones has long played an important role in the media arts field; he was founder and Executive Director of Ithaca Video Projects, a pioneering media arts center, from 1971 to 1984, and Director of the Ithaca Video Festival from 1974 to 1984. He received a B.A. from Beloit College and an M.F.A. in creative writing from Cornell University. Among his numerous awards are grants and fellowships from the Ford Foundation, the Rockefeller Foundation, and the National Endowment for the Arts. He has held faculty posts at Ithaca College, Howard University, the State University of New York at Fredonia, and was Batza Distinguished Scholar in Art and Art History at Colgate University. He has held a number of artist residencies around the world and his videotapes and installations have been exhibited internationally. Jones currently lives in Atlanta, Georgia.

This project is made possible by a generous grant from The Elizabeth Morse Charitable Trust.

Development of Dateline: Bronzeville has been made possible, in part, by significant support from The Black Metropolis National Heritage Area Commission.

Exhibition Opening and Artist Talk, September 30th, 2016, 6-8pm: Artist Philip Mallory Jones will speak at 7pm on the night of the exhibition opening about his work, the game and the exhibition at the Dorchester Art and Housing Collaborative Center (1456 E. 70th St, Chicago, IL 60637). The opening runs from 6-8pm. FREE

Bronzeville Bus Tour, October 1st, 2016: 10-11:30am: Jones and Bronzeville Visitor Center Executive Director Harold Lucas will speak about Bronzeville’s past, present and future during an personal and illuminating bus tour of the Bronzeville neighborhood. LIMIT 10 Guests. FREE. Bus pickup is at the the 35th / IIT / Bronzeville stop at State and 35th. To reserve your seat, please contact Jonathan Kinkley at jkinkley@vgagallery.org. 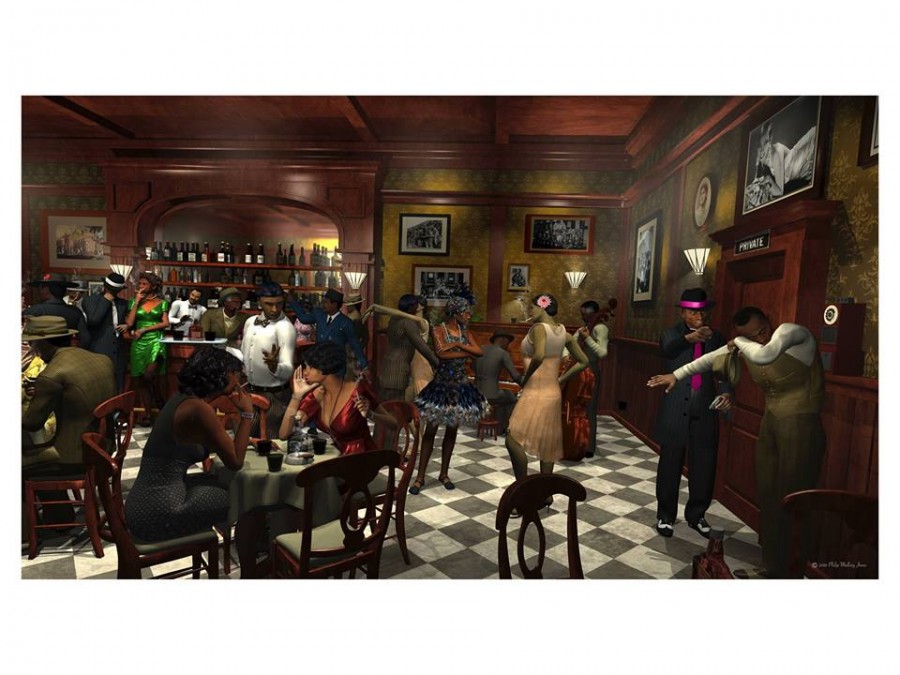