On view through Saturday, August 20th

Three artists from different parts of the world who work in three different ways. The conceptual process and text based work of ieke Trinks (Holland|Sweden) stands in flattering contrast to the sculptural site-specific movement of Zephyr (Chicago) which, in turn, is a fascinating counterpoint to the action and image based work of Carlos Salazar Lermont (Venezuela).

ieke Trinks (Holland|Sweden) is a visual artist based in Rotterdam, Netherlands, and Malmö, Sweden. Her performance art is presented in several countries in Europe, South America, Canada and the USA. She’s part of the performance collective TRICKSTER and organizes Performance Art Event (PAE) in the Netherlands with artist Nina Boas. For her piece at Defibrillator, “Performance Monologues”, Trinks started visiting artists in January 2016 to record their spoken descriptions of a past performance art work. She then replays and memorizes the recordings, interested in the possible afterlife of performance. Such an afterlife often survives by being passed on through memory and speech. She will recite performances from several artists. Her voice and person become a medium, presenting the record of the past work. Trinks has performed at DFBRL8R before. In 2013 she performed Order of Things as part of an ongoing work focused on object, action and language. Around that period, Trinks started to explore public and private places for performance, often in collaboration. Her work has been hosted by Out of Site (Chicago); Curitiba Biennial (Brazil); Playful Arts Festival (Netherlands); and Amorph! (Finland). In 2015 she presented Variety Show at the New Performance Turku Festival in Finland. In July she presented Value Products for Outside/Inside (Boston). www.ieketrinks.nl

Zephyr (Chicago) is an experimental dance company founded in 1990 by artistic director, Michelle Kranicke. In 2010 she began to shift her aesthetic perspective and creative process, reexamining how dance should be presented, who determines what movement is considered dance, and who lays claim to the role of performer. In 2015 Michelle conceived of, curated and co-presented The aMID Festival at Links Hall, a 9-day festival celebrating the underserved performative body of the experienced artist and challenging commonly held views regarding the age of a dancer. From 2012-2014, with an artist team comprised of an architect, video artist, textile artist, composer, lighting designer and dancers, Michelle premiered, and Defibrillator Gallery co-presented, The Balance In Between, an 80 minute immersive dance piece that was named one of the one of the 7 best dance events of the year by Lauren Warnecke writing for The Windy City Times; Out and Back in Again, a 2-hour durational dance work set to original live music and presented under a catenary of fabric; and Allowances and Occurrences, a 3-hour durational dance work that invited one to consider the movement of both performer and viewer as dance. In April 2013 Michelle choreographed 40 minutes from november, a commission by the City of Chicago for the Pritzker Pavilion stage in Millennium Park. In 2011 she was commissioned to create a 3-hour durational dance performance alongside Korean performance artist Gim Gwang Cheol as part of Defibrillator Gallery’s ALIVE Performance Series. Michelle is former Chicago Dancemakers Forum Lab Artist and has toured her work nationally with Zephyr. www.zephyrdance.com

Carlos Salazar Lermont (Venezuela) specializes in performance art and action based works that incorporate photography, video, installation and spatial interventions. After receiving his high school degree on Fine Arts in Drawing and Painting from the Escuela de Artes Visuales Cristóbal Rojas (2005), he earned his BFA in Sculpture from the UNEARTE (2012). In 2013, Lermont is the recipient of an Honourable Mention in the XVI Jóvenes con FIA Salon, and in 2014 with the Salón Jóvenes con FIA 2.0/3 Prize. He also received an Honorable Mention for the curatorship of Desafío al Poder, for the International Contemporary Art Biennial of Los Andes. His work has been shown in several international events including Experiencias de la Carne (Perú, 2015), Soap Box Sessions (UK, 2015), PAEkort #14 (Netherlands, 2014), Rapid Pulse International Performance Art Festival (US 2013), TRAMPOLIM_plataforma do encontro con a arte de performance (Brasil, 2011), NADAQUEVER (Argentina, 2011), HORASperdidas (México, 2010), and Performar (Dominican Republic, 2009). In Venezuela he has been part are ID performance, Encuentro de Arte Corporal, Velada de Santa Lucía, Fugaz: Feria de Performance del Estado Lara, NOMASDECINCO, PerfoChoroní, and many others. In 2014, he started P3 Plataforma Para Performance to champion creation, dissemination, research, and education surrounding Performance Art. In 2015 he created the International Performance Art Biennial of Caracas, Venezuela. www.carloszamuro.blogspot.com 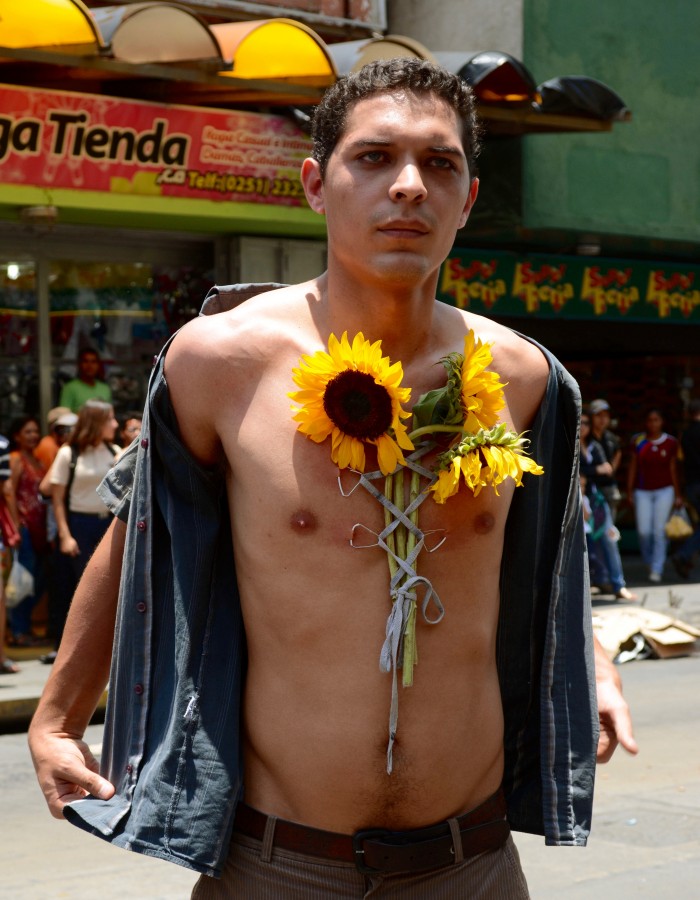