On view through Friday, November 11th

The Ukrainian Institute of Modern Art is pleased to celebrate the 25th Anniversary of Ukraine’s Independence with the exhibition, “Reality Check,” curated by Adrienne Kochman, one of North America’s foremost scholars of contemporary art of Ukraine and the Ukrainian diaspora.

For Ukrainian professional artists, the collapse of the Soviet Union created an opportunity to learn and engage with current artistic developments occurring in the west, as well as delve into those of the past from which they had been excluded. “Reality Check” explores the work of eight contemporary artists affected by Ukraine’s 1991 independence: Lydia Bodnar-Balahutrak, Anna Bogatin, Yhelena & Michael Hall, Roman Hrab, Natalka Husar, Yulia Pinkusevich, and Valya.

In 1991, Cleveland-born, Ukrainian-American artist Lydia Bodnar-Balahutrak visited Ukraine for the first time; the trip, and subsequent visits following, reignited the artist’s concern for the human condition, resulting in works that liken Ukraine’s ravagement by the Soviet Union with the ravagement of nature by the Chornobyl disaster. Anna Bogatin, too, finds inspiration in nature; the artist, born in Ukraine, draws from the forms and colors of nature, using new technologies to create compositions that suggest the quest for peace and harmony.

Roman Hrab’s works deal with the way that images documenting a given place, like Ukraine’s Carpathian Mountains or the Green Zone in Baghdad, inevitably become more unrecognizable the more one attempts to digitally enhance them; finding this an apt metaphor for experiencing a landscape, he translates these images into multimedia installations. Conflict zones also feature in the work of Yulia Pinkusevich, who was born in the USSR with both Ukrainian and Russian heritage; her installation, Silencing the Cacophony, references the Euromaiden resistance in Kyiv as well as protests that occur globally.

Born in New Jersey to Ukrainian Displaced Persons, Natalka Husar examines issues of persona in her works, Why They Behave Like Russians; here, the figurative artist captures the trend amongst men in post-Soviet Ukraine to dress like Russian mobsters, reflecting a need to intimidate to survive. Valya, too, addresses notions of identity in her figurative works, but to a much different end; with repeated images in her textile pieces of an aged ‘Mother Eve,” the artist reinforces the commonality that all humans share in their biological ancestry.

Ukrainian-born, Chicago-based artist, Yhelena Hall and her collaborator, Michael Hall create works that look to the past, but reinvigorate the outdated with the contemporary. In Bullafolis Cylinder, the artists appropriate the outmoded function of a bellow, reimagining it as a large scale, interactive bubble blower. 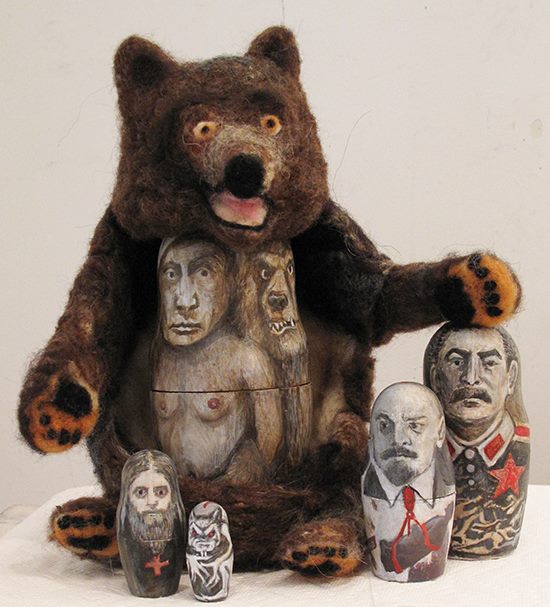