Trio A / Trio B: Watching Me / Watching You and THE TOP

On view through Monday, August 8th

Chicago artist Joshua Kent and New York-based Mark McCloughan present “Trio A / Trio B”, an evening of their respective pieces “The Top” and “Watching Me / Watching You”. “The Top” presented by McCloughan’s No Face Performance Group featuring Jaime Maseda and Melissa Krodman and is presented alongside the work of Kent and his two collaborators Courtney Mackedanz and Matthew Nicholas. Combining simple gestures and quotational pop, both works employ deceptively simple forms to open up conversations around larger issues of cannons, presentation, and artifice in contrast to sincerity.

In addition, Joshua Kent and Mark McCloughan, with Zoe Nelson and Angus McCullough, will be showing in an art exhibition curated by Kate Bowen.
The opening will be at ACRE Projects on Friday, August 5th from 5-10pm. ACRE Projects is located at 1345 W 19th St, Chicago, IL 60608.

Joshua Kent’s new performance, WATCHING ME / WATCHING YOU, explores the subtly of oppression within everyday gestures. Crafted in the shadow of accessible pornography and heavily mediated bodies, two men and one woman move within a sparse environment speaking words written by others and performing dances they acquired from television. As roles shift, viewers become increasingly aware of the complicated responsibilities at play, and simplified narratives of gender and race begin to fail. Gradually even the spectatorship of live performance is questioned, as those witnessing WATCHING ME / WATCHING YOU become challenged by their own roles within forces of domination.

THE TOP is an investigation of the bare minimum needed to sustain a dance, a performance, an audience’s attention and focus, by the Philadelphia and NYC-based No Face Performance Group (Jaime Maseda and Mark McCloughan). Interrogating the tension between stillness and motion, minimalism and dynamism, silence and pop music, the piece invites viewers into a relationship with the performers that is at once open, direct, intimate, and confrontational. It toes the delicate line between dancing for others and dancing alone with grace, humor, and style, exploring how these presences can co-exist together in public.

“Here, creators/performers Jaime Maseda and Mark McCloughan set out on a difficult task: to present quotidian actions and interactions with an attention that feels meditative rather than tedious. Their success is remarkable.” -Phindie

“While the content [they] examine is challenging and urgent, I took great comfort in the methodologies of the work: its aesthetics, wit, structure, cast, sampling from pop culture, news, and gender theory, the spots that felt utterly sincere and honest held against those that were super affected.” Matt Morris on Watching Me / Watching You” 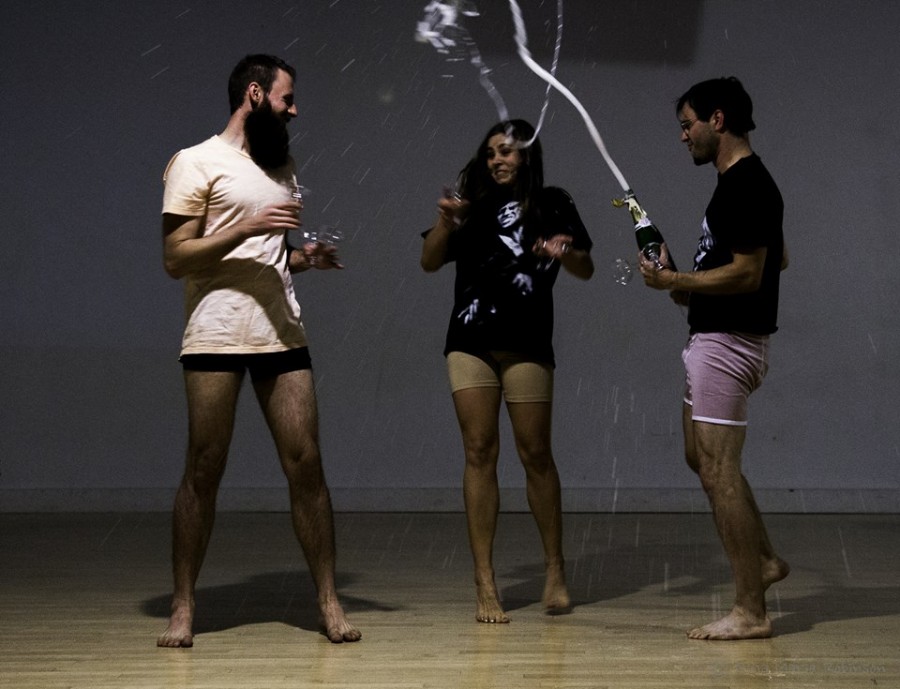