Admission to this talk, the exhibition and the Chicago Cultural Center is always FREE.

Paul Catanese: Visible From Space
Through September 27, 2016
For his premier solo exhibition in Chicago, artist Paul Catanese creates an interdisciplinary artwork that ponders the creation of Earthly drawings as seen from the Moon. Following experiments involving camera-equipped aerial vehicles – from kites to rockets to drones – flown over high desert settings, this artist residency and exhibition will create both operating theater and theater of operations in an embrace of the scientific, military and pedagogic connotations of these terms. The artist will compose large-scale diagrammatic drawings on the ground level using various props and then, at regularly scheduled intervals, pilot a 12-foot helium-filled blimp to fly over, observe, project and record aerial footage of the evolving “viewed from the moon” works. Viewers are encouraged to visit multiple times to witness the evolution of this project intermingling an artists’ studio, film set, black box theater and site-specific installation. 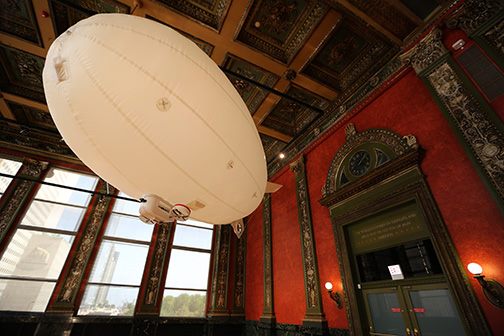