Come march with Cauleen Smith and Terrain as we perform Cauleen Smith’s “The Black Love Procession: Conduct your Blooming” in the Oak Park 4th of July Parade.

Please join us in the parade and meet us at 9:30 on Monday, July 4 at Longfellow Park – Ridgeland Avenue and Adams Street. The parade marches at 10AM and travels north on Ridgeland to Augusta Street, turning east to disperse near Whittier Elementary School at Harvey Avenue.

Conduct Your Blooming is a phrase taken from the great poet Gwendolyn Brook’s poem “The Second Sermon on the Warpland”. Smith describes this poem as a love letter to working class black people, saying ”She wrote that poem and ended it with her wish and her will for us: ‘Conduct Your Blooming In the Noise and the Whip of the Whirlwind.’ What more could one want for the people she loves?”

The Black Love Procession was first performed in response to an artwork showing the outline of the body of murdered Michael Brown exhibited at a gallery in Bronzeville. Smith felt that the gallery was filled with work that was violently offensive. She met with a group of artists and all determined to create an event that was an offering instead of a protest. “We just wanted to tell our folk that we loved them.” said Smith. This love came in the form of “The Black Love Procession”, a literal translation of their intention and a way to honor the losses to the Black community that have been felt so strongly the past year while also creating a hopeful environment.

Now, in this second iteration, we can carry the banner high as an offering of love to all the citizens of Oak Park- black, chinese, hispanic, first nation, islanders, white, queer, straight, feminist, trans and all blends of the above. After the parade, we will return to Terrain @ 704 Highland Ave., for a bar-b-que and the hanging of the banner on site. All are welcome to stay until the fireworks display at OPRF High School after dark.

Cauleen Smith is an interdisciplinary artist whose work reflects upon the everyday possibilities of the imagination. Her films, objects, and installations have been at the Studio Museum of Harlem, Houston Contemporary Art Museum; Yerba Buena Center for Art, and the New Museum, New York, D21 Leipzig and Decad, Berlin; The Kitchen, MCA Chicago, Threewalls, Chicago. Smith is the recipient of several grants and awards including the Rockefeller Media Arts Award, Creative Capital Film /Video, Chicago 3Arts Grant, and the Foundation for Contemporary Arts, Chicago Expo Artadia Award, Rauschenberg Residency and the Albert Award. 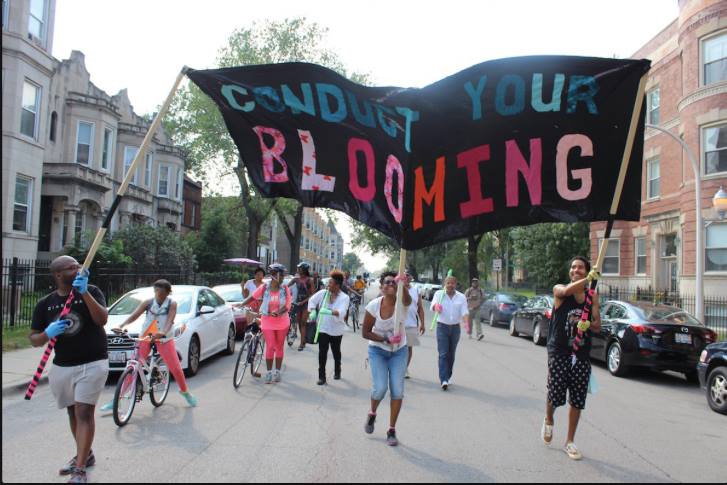