Glenn Ligon (b. 1960) is an artist based in New York. He received a Bachelor of Arts from Wesleyan University in 1982, and attended the Whitney Museum Independent Study Program in 1985. A mid-career retrospective of Ligon’s work, Glenn Ligon: America, organized by Scott Rothkopf, opened at the Whitney Museum of American Art in March 2011 and traveled nationally. He participated in All the World’s Futures at the 56th Venice Biennale (2015), and he curated the group exhibition Glenn Ligon: Encounters and Collisions (2015) with Nottingham Contemporary and Tate Liverpool. 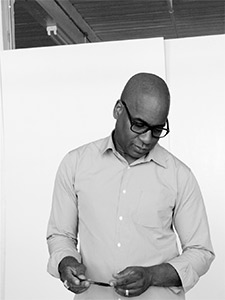