Fred Fleisher: The Unanswered Question Is the Key to Your Soul

On view through Saturday, May 21st

Stuart & Co. Gallery is pleased to announce The Unanswered Question Is the Key to Your Soul, an exhibition of new works by Fred Fleisher. Moving between painting, sculpture, video, and performance art and mining imagery from popular culture, fashion, religion, astrology, philosophy, and politics, Fleisher leads us into a world where the cultural noise that surrounds everyday life is amplified rather than muffled. Through his use of appropriation, dismemberment, transference, and humor, Fleisher acts as both a modern-day shaman and trickster systematically stripping objects and icons of their original meaning and power in order to spotlight unexamined beliefs and definitions of self that tend to get lost in externals.

Fleisher purports that “unanswered questions lead to enlightenment, or at least let us know who the hell we are”. Modern social constructs tend to deny the opportunity of examining belief systems which have been instilled in us from early childhood and often remain unresolved in adulthood without notice. By reinventing histories, policies, and dogmas through what appears to be light-hearted characters and archetypes, Fleisher confronts his viewer with highly complex undertones that strive to jolt them into closer examination of the work at hand, their own experiences, and messages being broadcast by society at large.

Works such as Solid! and Fired Up! from Fleisher’s Help Yourself series present hackneyed phrases juxtaposed with childlike animal characters that seem to contradict the slogans with which they are tagged. These trade characters, in addition to referencing product branding, present us with oversimplified mantras or ineffectual self-help buzzwords which speak to both the commoditization of such industries as well as the “quick fix” culture present in contemporary society.

Fleisher reinvents religious iconography in a similar kitschy fashion. Cosmic Christ depicts a cartoon Jesus smiling and gesturing with two thumbs up within a triangular frame more closely resembling the Pink Floyd prism or a loose reference to the Illuminati than the trinity symbolism of its original intent. Likewise, The Holy Trinity substitutes Mil Máscaras, a masked WWE luchador wrestler, for the Father, a dime store portrait of Jesus for the Son, and Ultraman, a classic superhero that materializes from space based on the actions of a human host, for the Spirit. Questions of heresy, misapprehension, idolatry, and digestibility are posed for the viewer to decipher.

Fleisher enjoys melding what is considered to be “safe and secure” with that which is contradictory thereby creating an aura of complexity and alarm such as can be felt in Seeing Red. The reconstitution of a child’s action figure head with the body of a decapitated stuffed animal imbues a tension that is non-existent within the singular objects themselves. This technique is further employed in Fleisher’s Dismembered Ideas series which places the heads of famous thinkers and political icons on the bodies of fashion advertisement models. Works such as Lincoln For J. Crew and Nietzsche For Ralph Lauren leave us questioning what ideals are upheld in a capitalist society, the importance of role models, and the documenting of histories in general.

Integral to Fleisher’s video installations is a character dubbed “High Octane” crafted from conflicting archetypes of a business man and a clown or court jester. Not surprisingly, Fleisher’s alter ego, donning a suit, tie, and face paint, imparts wisdom through comedic skits. In Stupid People High Octane teaches his alien abductors esoteric hand gestures in an attempt to illustrate the power of human interaction. As with many of his works, the line between fantasy and reality, blasphemy and belief, mysticism and science, and humor and sobriety is intentionally muddied such that High Octane might be viewed as a religious figure, a cult leader, or merely a prankster.

Capping the exhibition are two distinct tableaus, the painting Our Anthropocene, or You vs. Me, Me vs. Myself, Us vs. Them and the mixed media installation Universal Knowledge, both incorporating many of Fleisher’s signature themes and cast members. In the former, human activity and conflict dominates the canvas while a Christ figure passively presides over battling beasts, fairy tale figures, cartoons, clowns, and wrestlers. The title suggests humankind as the most important element of existence while also alluding to impending global environmental destruction and warfare. The latter depicts a pantheon of neo-mythological totems and deities surrounding a Hot Wheels race track, a disco ball, and an LED “Open” sign. The work is a jeu de mots in that it presents fictitious or controversial references tightly coupled to conspiracy theories which are not at all universally accepted. Fleisher seems to be suggesting that fragments of knowledge and falsehood are embedded in all of our histories, religions, and fables yet only a subset are considered to be acceptable irrespective of their plausibility.

The world is caught in a duality, a multiplicity to be exact. Definitions of self are always lost in externals. Fleisher’s calamitous world makes this blaringly apparent. The culmination of his recurring concepts is that of a homegrown prophet and visionary beseeching us to keep our eyes open, even while laughing.

After serving in the Army, Fleisher attended Penn State University where he received a BS and BFA in Painting followed by completion of his MFA at Queens College, CUNY. Fleisher has exhibited extensively across the country and internationally, gaining representation by Rockelmann & in Berlin, Germany as well as Stuart & Co. Gallery. He currently lives in New York City where he also serves as an Adjunct Professor at SUNY, College at Old Westbury and Hudson County Community College.

Please join Stuart & Co. Gallery for the opening reception of The Unanswered Question Is the Key to Your Soul on Saturday, April 23rd, 2016, from 7-9pm.

For more information, please contact Britney Lipton at (312) 487-1850 or via email at britney.lipton@stuartandco.com. 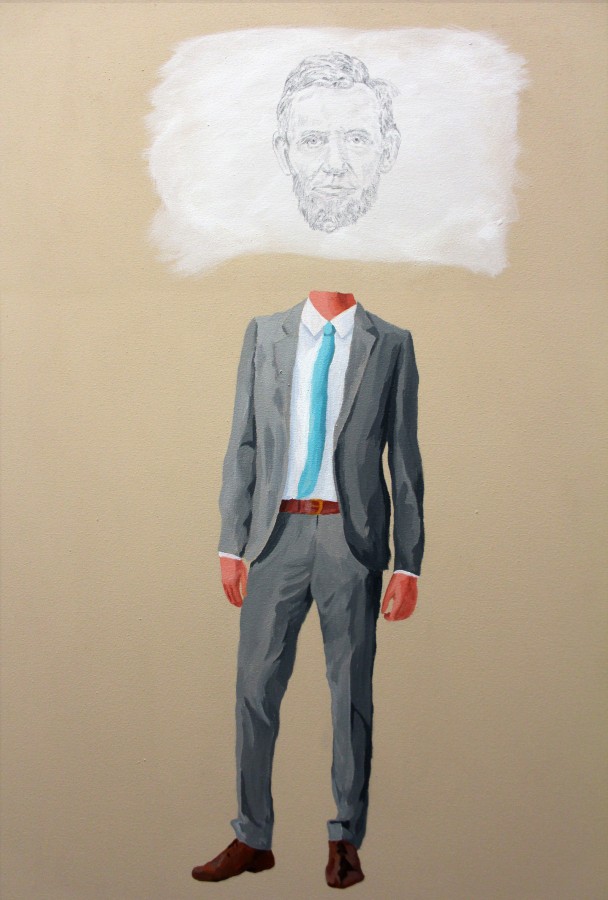