Pilsen Outpost is pleased to present visit Mágico new artwork and installations by Chicago-based artist CHema Skandal! The opening reception will be Friday, April 8 from 6pm to 11pm. The exhibition is free and open to the public for viewing through April 30, 2016. The exhibit is also in conjunction with the Latino Art Now! Conference:
Re-Imaging Global Intersections being held in Chicago, April 7 through the 9th, 2016.

Since arriving in Chicago from Mexico City in 2010, CHema Skandal! has literally taken Chicago by Storm with his prolific output and instantly becoming one of Chicago’s most recognizable and sought after artists. Scandal! is a graphic artist, painter and screen printer. His enthusiasm for popular culture in music and images of the last century are evident in his body of work ranging from gig posters, installations and outdoor murals.

In visit Mágico, the scope of CHema’s work is explored through his uniquely rendered and playful imagery that speak of the idea or notions of place and the transformative qualities that has on one’s life as well as the social interaction between individuals.

“Mágico is a place out of reality. It is not a country or even a city, but a reflection of our world. We are all living in Mágico. Sometimes reality is so hard to take that you have no other option than to search for new horizons, transforming yourself into a traveler, a tourist or an immigrant. We are all immigrants somewhere in some way… Mágico is a place where everyone is welcomed and everything is beautiful. Come experience it and be enchanted and surprised.”

Pilsen Outpost, 19 58 W. 21st Street Tel: 773. 492-2412 is an artist run retail shop and gallery in the Pilsen neighborhood of Chicago. Hours: Monday and Tuesday by appointment, Wednesday through Sunday from 10am to 8pm. 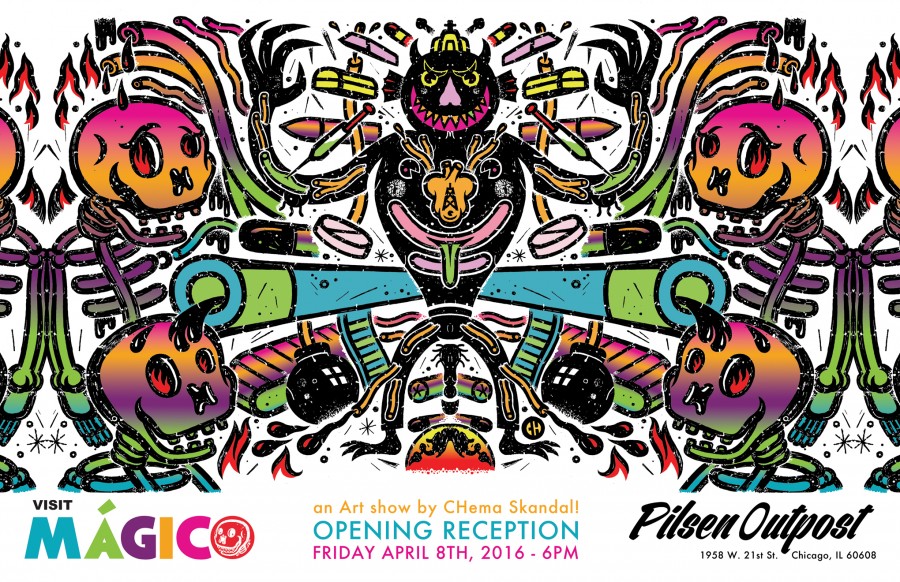