On view through Saturday, March 26th

International artist, Cesar Conde is a social activist artist who has been touring a socially-conscious art project entitled “The Bang Bang Project” over the past year. The project will be continuing it’s journey with a debut in the South Loop of Chicago with an exhibition entitled, “Collision”, which is a combination of two recent bodies of work. “Collision” opens at Elephant Room Gallery on Saturday, February 20th with reception from 6:00pm to 9:00pm.

Painting portraits of real people with grace and dignity has always been one of the themes surrounding Cesar Conde’s work. The international artist, based in Chicago, recently started up a project that contributes to the current social dialogue flooding our news feeds as of late, but an issue that has always existed for those who experience social injustice all over the world. “Collision” is a combination of two series entitled “In the Hood – Portraits of African American Professionals Wearing a Hoodie” and “The Bang Bang Project”. “In the Hood” is an award winning project where Conde created paintings of African American professionals wearing a hoodie. Conde was inspired by the tragedy of the African American teenager Trayvon Martin, who was shot while wearing a hoodie in a Florida neighborhood. In 2015, Conde conceptualized “The Bang Bang Project”, a series of staged portraits painted by Conde, featuring artistic collaborators posing in honor of those whose lives have been cut short by police officers. With eyes open, they appear to have just been expelled of their lives, but still present in the lives they’ve led up until that moment. Conde has been exhibiting this series in conjunction with the use of text, lighting and music, using the exhibition as not only visual stimulation through the portraits but also a moment to remember and pay tribute to those lives cut short and bring attention to this epidemic.

“I grew up believing that art was meant to beautify a space. I still believe that. That is why I love colors, abstractions and other forms of expression. But I also ask, “What if an image can change the world?” That to me is more beautiful and powerful. I choose difficult issues and that’s not so beautiful because they are ugly and hurtful. They deal with pain, racism, police brutality, poverty and society’s illness. But I have faith in humanity to make change.” – Conde.

“Collision” opens on Saturday, February 20th with a reception from 6:00pm to 9:00pm at Elephant Room Gallery located at 704 S Wabash Ave. in the South Loop. The exhibition will run through March 26th and hours and appointment information can be found on the gallery’s website: www.elephantroomgallery.com

A product of Filipino diaspora, Conde landed in Chicago’s west side 40 years ago. He then moved to Seattle and where he participated in Seattle’s first school busing integration program. He resettled in the Windy City 28 years ago. Conde is contemporary painter who deals with relevant social issues. He studied at Angel Academy of Art in Florence, Italy. He also studied with the French master, Patrick Betaudier. Conde is also part of a permanent mural creation at The Field Museum in a project called Art and Anthropology: Portraits of an Object as Filipino which was funded by The John D. and Catherine T MacArthur foundation.

Conde is an artist and activist who believes that art is a powerful tool for social change. Angered by the shooting of Trayvon Martin, Conde created “In The Hood – Portraits of African American Professionals Wearing a Hoodie” which won the first “Paul Collins Diversity Award” in ArtPrize 2014. In The Hood focused on “Perception” vs. “Reality”. In November of 2014, “The Bang Bang Project” was conceptualized during the protest march on Michigan Ave. after the acquittal of Michael Brown’s killer in Ferguson, Missouri. It focuses on “Racism” and “Police Brutality”. 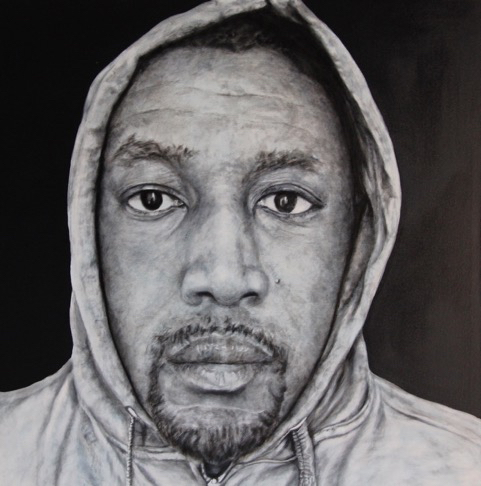