On view through Saturday, January 23rd

I’ve long had an ambivalent relationship with photography, specifically snapshots. A decade or so ago, when visiting over the holidays, my mother wanted to show my new sister-in-law some family photos. When my brother and I expressed utter disinterest, my mom snapped, “What’s the matter with you, don’t you like pictures?” I guess not. Like the narcissist within all of us, sure, I dig looking at photos of myself over the years but I don’t have much compulsion to record my life through images (though Instagram is changing this somewhat). I’ve long wondered why people have their photo taken in front of monuments, historical sites, paintings in an art museum; this fascinates Nicholas Frank, too (more on this in a minute). Back to my mother: she visited Chicago recently and I met her and my brother’s family in Millennium Park. She asked us to stand in front of “The Bean” for a photo. I died a little inside.

Nicholas Frank has long been interested in photographs. The first time I saw his work was in the mid-1990s at the Madison Art Center in Wisconsin in something called “The Wisconsin Triennial.” He showed meticulously carved-up snapshots – a rock or a log, cut out from a standard-sized pre-digital photograph, this tiny snippet then affixed to a long pin, so as to create the illusion of the logs and rock floating away from the wall, free of any context. As a grad student at UW-Madison, grappling with art with the capital-A then, I was struck dumb by this simple and unassuming gesture. It was easily the most memorable presentation in the show, and I still don’t really know the meaning behind it. Thus began my interest in Nicholas Frank and his work, stemming from his interest in the snapshot. Strange bedfellows us.

For Post-Self, his fourth solo show with Western Exhibitions, Frank recognized that the selfie has relegated to the past a certain quaint ritual, when tourists had to ask someone to help them get pictures of themselves in front of famous locations (or anywhere, really). The subject stands frozen, looking awkwardly like they’re facing a firing squad, about to be ‘shot’-unsure of which exact uncandid instant would be preserved forever. Picture after picture of the self, in front of things. With the shift in agency of selfies, needing no enabler, this inversion of subject is finally clear. Any photo really is about oneself-the backdrop changes, but we travel to every exotic locale in order to witness our own constancy.

Frank’s Pre-Selfies photographs depict people taking pictures of people, in the late moment (c. 2006-2009) just before selfies became pervasive. They are in unique, artist-designed frames that employ planar perspectives within each photograph. What selfies and pre-selfies share is that they are momentary removals from the flow of awareness, the program stopping to regard itself, again and again, like skips in a record, momentum resetting continually, a song taking a snapshot of itself. A companion piece, Greatest Skips, is an LP of skips from the artist’s personal vinyl record collection, two 15-minute compositions of these minor incidental compositions.

Both of these projects are interruptions in communication, mini-revolts or removals that reset the purpose of shared space and time. The new sound sculpture Tipsy Grouches (Communitarian Hypothesis) further explores the subject. Using an actual Milwaukee County Department of Public Works garbage can and stencil, and made with Alec Regan (of American Fantasy Classics, a Milwaukee conceptual art fabricator), as an argument between theorist Alain Badiou and members of New York’s Platypus group on the textures of social responsibility, and the meaning of revolutions as both destructions and resettings of order.

Nicholas Frank is an artist, curator and writer residing in Milwaukee. He ran the Hermetic Gallery from 1993-2001, co-founded the Milwaukee International in 2006, programmed INOVA (Institute of Visual Arts) from 2006-2011, and is currently Curator-In-Residence at the Poor Farm. Recent solo projects include NADA New York with Green Gallery and Untitled Art Fair with Nathale Karg (both 2013), Peregrine Program and Western Exhibitions (both Chicago, 2013), and dual solo exhibitions at Lump in Raleigh, NC and the Green Gallery in Milwaukee in 2012. Frank teaches New Studio Practice at the Milwaukee Institute of Art & Design. 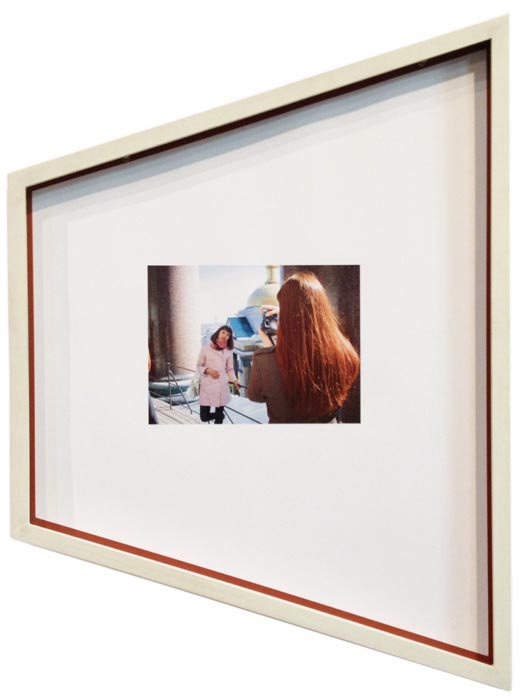