On view through Saturday, November 14th

Fraser Taylor works in a wide range of media, in painting, printmaking, sculpture, installation and collaborative performance, his practice occupying what he describes as ‘a space between abstraction and figuration.’ During a year’s sabbatical from the School of the Art Institute of Chicago – where he has worked since 2001 – Taylor’s return to Scotland has seen him immerse himself exclusively in drawing, producing the extended series of works on paper from which a selection are shown here. Working at WASPS Studios in Shetland, Newburgh, and Glasgow, the artist’s intention has been to investigate his relationship and history to the landscapes of his native country.

Commencing in June 2014, Taylor’s first two months were spent in Scalloway. This was his first visit to Shetland, and he found himself awed by the treeless landscape, its dramatic shifts of colour, shadow and tone enhanced in a piercing summer light. He began by making drawings in layered oil pastel, postcard-sized works of individual islands, each silhouetted darkly against a blue or grey sea, or glowing – red, yellow, orange, green – in an envelope of blackness. There followed the monochromatic Black Holm series, in which patches and strips of collage reference rock strata, or serve to emphasize the verticality of towering volcanic cliffs. Tightly framed within the sheet, each island appears monumental. Some contain shapes redolent of figural fragments, as though traces of Neolithic inhabitation were somehow fused within the island’s geology.

In contrast to the Shetland drawings, those from the coastline of the Firth of Tay at Newburgh, a lush landscape of trees and foliage, are lighter, more airy, the paper a field upon which lines skim and trail, traversing foreground, middle ground and distance.

In drawings of the human figure, Taylor summons heft and articulation from a handful of tensile lines and shapes. During a recent visit to Italy he was greatly affected by Masaccio’s Expulsion out of the Garden of Eden and Fra Angelico’s Annunciation. In each painting he became fascinated by the physical and emotional space between its two depicted figures. The ambivalence of the revised title of his extemporisations on the Masaccio – the Expulsion into the Garden series – implies subversion of the allegorical, a redefinition of moral or political exile. As in much of his recent work, in preference to brush or pen Taylor has here tended to draw with twigs of various sizes dipped into black ink. The resultant blunting of facility produces an inconsistent, fractured or broken line. Similarly, collage is often adhered with smudges of oil paint, its gradual seepage staining the paper. Such unpredictability of effect is central to the artist’s aesthetic. The images forged through his open-ended practice of experiment and improvisation draw equally on observation, memory and association. Landscape and body act as metaphors, their meanings located somewhere in the interstices between figuration and abstraction. 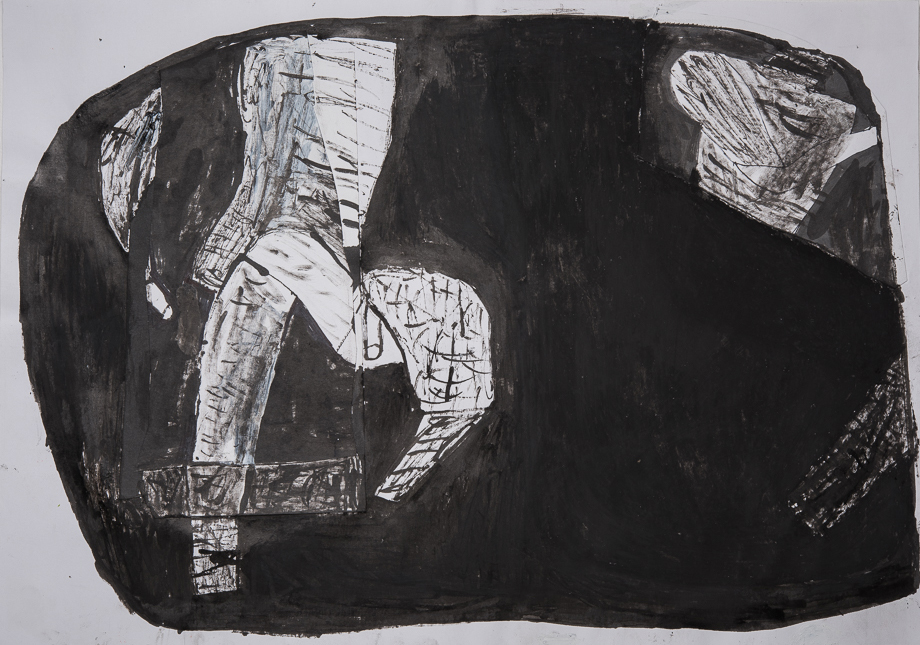