On view through Saturday, October 17th

Night Club is pleased to present its first solo exhibition of the work of Autumn Ramsey. ‘White Rabbit,’ a key painting in the exhibition, represents a small, furry mammal and is a seminal figure to understanding Ramsey’s exhibition and larger practice. The White Rabbit is also a reference to a character from Alice’s Adventures in Wonderland, a 19th century novel by Lewis Carroll which recounts the adventures of a girl named Alice falling through a rabbit hole into a fantasy world populated by curious anthropomorphic creatures. The novel’s play with logic is considered one of the best examples of literary nonsense, a genre that supports communicative language while deeply subverting it. The White Rabbit is also a reference to a personal vibrator meant for sexual use. Both references lead into a hole of psychological discovery, and whether we understand it literally or metaphorically, following the White Rabbit means following seemingly innocuous, even ridiculous signs into a realm of extraordinary circumstances that challenge common beliefs.

Ramsey’s sphinxes, birds of prey, and apex predators, by contrast, consciously feed on other animals, often by force, and are characterized by keen eyesight and long talons and in the context of her practice they may be seen both as archetypical protectorate totems as well as metaphorical phalluses. Ramsey herself is both predator and prey, producer and consumer, and it’s the psychological complexity of the relationships between them and the play that they make visible that’s at the core of her practice. The result is a startlingly beautiful array of images that succinctly summarize ideas of life feeding on life, with the feeder also being that which is consumed, a laconic image of mortality. The animals are of particular interest; Ramsey’s relation to them shifts constantly as she continually reposition herself within their representations as a way to make us aware of the character of her practice and the circle of interpretations that distinguishes it. 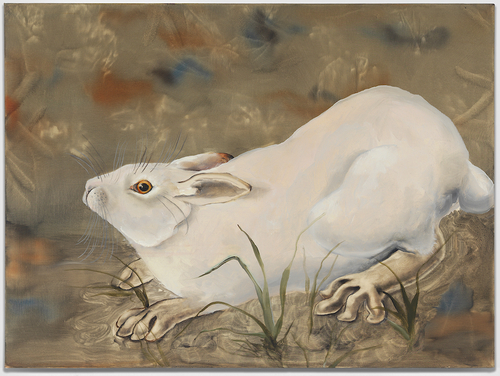