On view through Saturday, May 30th

opening discussion | 5pm
reception | 6pm
May 30 2015
Midway Studios, Great Hall
University of Chicago
6016 S. Ingleside Ave.
Chicago, IL 60637
(enter from the courtyard side of the building, between Midway Studios and the Logan Center for the Arts)

Axis and Allies is an exhibition and conversation series seeking to pair MFA-holding or seeking artists from different institutions in an effort to expand contextual circles and encourage critical discourse between geographically and/or educationally disparate practices through conversation and exhibition. Such an exhibition series allows for the creation of productive relationships through both harmonious and incongruent associations.

Joshua Backus is an artist from Syracuse, New York (and elsewhere). His recent work investigates interruption, dislocation and technological mediation. Joshua studied at the Pennsylvania Academy of the Fine Arts and holds a BFA from The School of the Art Institute of Chicago. He is an MFA candidate at The University of Chicago. joshuabackus.com

Jon Rehwoldt is an artist from Chicago. His current paintings include images of animals and video games. He has a BFA from The School of the Art Institute of Chicago and will be an MFA candidate at Virginia Commonwealth University beginning this fall.

Zachary Harvey writes:
My work probes and celebrates the nature of desire, as it relates to masculinity within our culture. Desire is a continual striving energy, an appetite that is only ever temporarily fulfilled. This libidinal force underpins my creative impulse, partially transforming sexual energy into creative energy, leaving obvious traces of longing and sensual materiality. One of my favorite tools is my caulk gun. I like the way the material shoots out of the tip like ejaculate, while also speaking to the macho American action painters of the 1950s.

Reid Sancken believes his role, as an artist, is to entertain; to be very serious about being silly. His work is heavily influenced by the unexpected nature of improvisational comedy and grassroots music that readily reflects the unknowingness of being human. Using pre-manufactured objects as a structure to improvise around, his paintings, performances, sculptures, and installations are composed to keep the maker and viewer on their toes and asking, “what-the-who-the-Horton-hears-a-what-the?” 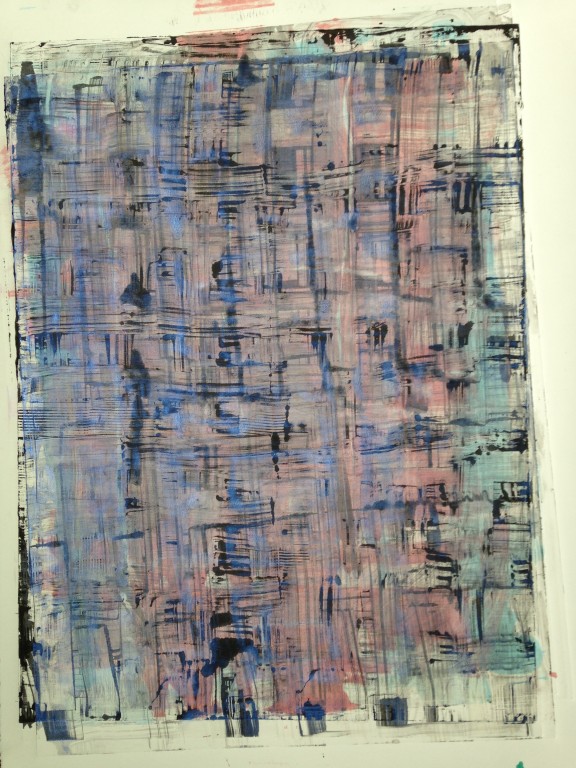