The world is mystical, dangerous and delicious

On view through Saturday, March 7th

Organized by gallery staff and presenting work in a variety of media, including printmaking, drawing, artist books, collage and sculpture, The world is mystical, dangerous and delicious opens with a free public reception on Friday, January 30 and runs through March 7, 2015. Gallery hours are Tuesday through Saturday, 11am to 6pm.

Elijah Burgher’s (b. 1978, Kingston, NY) drawings, paintings and prints utilize ideas from magick and the occult to address sexuality, sub-cultural formation and the history of abstraction. Citing early 20th century occultist Austin Osman Spare’s system, Elijah Burgher makes sigils-emblems to which magical power is imputed. By recombining the letters that spell out a wish into a new symbol, Burgher’s pictures of sigils literally encode desire while embodying it abstractly through shape, color and composition. For this show, Burgher will be presenting new abstract pressure prints made at Chicago’s Spudnik Press.

Burgher’s work has been included in the 2014 Whitney Biennial; the 2014 Gwangju Biennial as part of AA Bronson’s “House of Shame” installation; and in group shows at Witte de With Center for Contemporary Art in Rotterdam, The Netherlands; Hales Gallery in London; Cabinet in London; Exile in Berlin; Rhodes College in Memphis, TN; and the Sullivan Galleries at the School of the Art Institute of Chicago. His work has been written about in New York Times, Art in America, ArtReview, Artforum.com, New City and Daily Serving and was been included in Phaidon’s VITAMIN D2 hardcover survey of contemporary drawing practices. He lives and works in Chicago.

Dana Carter works across media often using ephemeral materials that convey the passage of time. In The world is mystical, dangerous and delicious, Carter will present works made by evaporating saltwater on fabric. Carter’s visceral hybrid objects look like images from satellites or gleaming mountains at night. The fabric is used as a physical representation of darkness and the crystalline forms give the viewer a sense of being disoriented in the landscape.

Pamela Fraser’s (b. 1965) loosely graphic paintings are subtly detailed, simple compositions. Her abstracted forms appear like an innocuous symbolic language that infuses flat colored shapes with a playful, sometimes humorous sensibility. She recently expanded her painting practice to include sculptural forms, both wall-based and in site-specific installations. In The world is mystical, dangerous and delicious, Fraser will be presenting one of her first forays into ceramics, an interlocking irregularly-shaped diptych of black and white panels perforated with triangular patterns.

Solo exhibitions include Galerie Schmidt Maczolleck, Cologne; Galleria Il Capricorno, Venice; The Blaffer Museum of the University of Houston; Casey Kaplan Gallery, NY; and Golden Gallery, Chicago. Fraser is a recipient of the Louis Comfort Tiffany Foundation Award and continues to be featured in national and international publications. Fraser’s work is represented by Galerie Anke Schmidt in Cologne, Germany. She lives and works in Barnard, Vermont.

Leah Mackin (b. 1985, Philadelphia, PA) work investigates the ephemeral nature and malleability of photocopied paper. In the book objects, paper is photocopied onto itself to create abstracted, bound compositions. In a new construction for this show, folded and conformed paper is presented in a table vitrine. For Untitled (Swipe) toner is unfixed and removed by the touch of a finger.

Her work has been presented in group shows at the Slusser Gallery at University of Michigan, the Printer’s Ball event in Chicago, Cranbrook Academy of Art, Quarter Gallery at University of Minnesota, and & Pens in Los Angeles. In 2012, Mackin presented a solo exhibition, Frequency Illusions at Western Exhibitions. Mackin lives and works in Chicago.

Dutes Miller’s (b. 1965, Pennsylvania) work critically engages with the mythologies surrounding human sexuality, especially an exploration of the male body as it manifests itself in gay desire, in its evident state of arousal, its protuberances, its emissions. His new woven collages in this show obscure bodies in a tangle of patterned elements.

Dutes Miller’s work has been reviewed in artforum.com, the Chicago Tribune, New City and the Chicago Reader. Groups shows include White Flag Projects in St. Louis, the Ukranian Museum of Art and 40ooo in Chicago. His collaborative work within Miller & Shellabarger won awards from Artadia and the Louis Comfort Tiffany Foundation and has been shown in galleries and museums across the country. Miller lives and works in Chicago.

Rachel Niffenegger’s (b. 1985, Evanston, IL) work focuses on the ephemeral state of the feminine figure in contemporary society, addressing notions of the body, sculpture, clothing and painting; alluding to both physical and psychological violence. Niffenegger will be showing a steel and epoxy clay sculpture from a new series of intimately scaled, open-form busts. This achromatic portrait suspends a mesh synthetic wig and idiosyncratic features from a bone-like hook.

Recent solo shows include Western Exhibitions in Chicago and Club Midnight in Berlin and her work has been included in group shows at Museum of Contemporary Art in Chicago; Museum for Modern Art in Arnhem; Bourouina Gallery in Berlin; Tracy Williams Ltd in NYC; Ceri Hand Gallery in Liverpool; and in Chicago at Corbett vs. Dempsey, Andrew Rafacz Gallery, and the Hyde Park Art Center. Niffenegger lives and works in Chicago.

Corkey Sinks (b. 1983, Dallas, TX) works in a variety of media including sculpture, textiles, and printed matter. Through constellations of escapist fantasies, self-help culture, and geometric pattern-making, Sinks seeks practical and psycho-spiritual alternatives to the mainstream. Sinks is showing a large hand-cut, heat-fused plastic piece besotted with black and clear triangles, a uncanny object that resembles both a quilt and tarp.

Recent exhibitions in Chicago include BLACK CAULIFLOWER, with Jamie Steele at Roots and Culture; Events, Coincidences, and Repercussions, a solo exhibition at Elastic Arts Foundation; New Collaborative works by Corkey Sinks and Jesse Butcher at Adult Contemporary; and RANCH, curated by GURL DONT BE DUMB at Iceberg Projects, Chicago IL. Sinks is co-founder of Walls Divide Press and lives and works in Chicago.

Deb Sokolow’s (b. 1974, Davis, CA) text-driven drawings combine research, fiction and humor to speculate on topics relating to politics, conspiracy theory and human nature. The drawings in The world is mystical, dangerous and delicious ruminate on recent interactions with ghosts.

Recent group exhibitions include the 4th Athens Biennale in Greece, The Drawing Center in New York City, Museum für Gegenwartskunst Siegen in Germany, The Institute of Contemporary Art, Philadelphia and Western Exhibitions in Chicago. Sokolow’s 2013 solo exhibition at the Wadsworth Atheneum Museum of Art, Some Concerns About the Candidate, was reviewed in The New York Times, and her work has been reproduced for Creative Time’s Comics project, for Swedish art magazine, Paletten, and in Vitamin D2, a survey on contemporary drawing. Sokolow lives and works in Chicago. 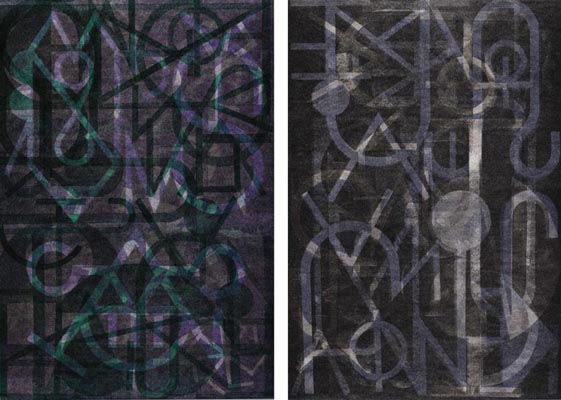