On view through Saturday, February 21st

Elephant Room gallery is proud to present the exhibition “Subterranean”, a visual duet of painterly expression with the collaborative work of Lewis Graham Taylor (YAMS) and Christie Chew-Wallace opening January 16th at 704 S Wabash Avenue in the South Loop. After first meeting at Elephant Room two years ago during a Graffiti Fundamentals class taught by Taylor, the pair met up again at Lacuna Artist Lofts where their studios were just across the hall from one another. They soon began to collaborate on works together on canvas. Chew-Wallace’s more traditional paintbrush realism fuses with the spray paint imagery of Taylor (known as YAMS in the graffiti writer community) in a compelling collision of color and expression. Their gestural play of mark making utilizes a variety of mediums, requiring the viewer to delve deeply into the multi-faceted layers of aesthetic found in each piece. The result of their collaborative work is playful yet artistically mature and harmoniously diverse. In short, it is a visual conversation between the two artists.

After rounds of trading their canvases back and forth between studios, the works will end up at Elephant Room in a culmination of their visual chemistry. The exhibition runs January 16th through February 21st with an opening reception on Friday, January 16th from 5:30 to 8pm. 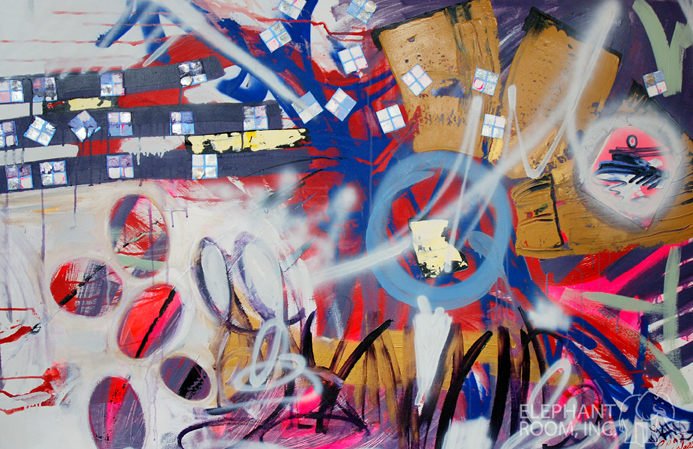