On view through Saturday, December 20th

THE SUB-MISSION is pleased to present Production of atomic credits, a site-specific installation by Meg Duguid. Part of the Tramp Project, the installation is a performance for the artist’s film project that adapts James Agee’s 1947 script, The Tramp’s New World. The project addresses her interest in the congruity of performance and its documentation as an intersection for aesthetic practice. Over the duration of the exhibition, Duguid will complete a series of filmed performances that result in a fully edited feature and cinema experience, a series of objects and sets, and a series of production stills. An opening reception will be held on Friday, November 7 from 6 to 8pm. The show continues through Saturday, December 20, 2014.

In The Tramp’s New World – originally written for Charlie Chaplin’s Tramp character – a super-atomic bomb is dropped, leaving seemingly just the one survivor, the Tramp. As the picture unfolds, it is clear that others have survived and are coalescing around two separate and completely different communities. For Production of atomic credits, Duguid will transform THE SUB-MISSION space into an open studio where she creates and documents the making of a large papier-màché mushroom cloud assembled around the architecture of a center column in the space. Created from paper cutouts from one of the artist’s previous works, the cloud will be constructed in a series of small, nested clouds that slowly build into a large mushroom cloud. The artist will use photo and video documentation of the process to produce a stop-animation construction of the explosion and the footage will be utilized as part of the opening credits of the Tramp Project.

Meg Duguid received her BFA from the School of the Art Institute of Chicago and her MFA from Bard College. She has recently performed and exhibited in Chicago at the Museum of Contemporary Art, 6018 North, Slow Gallery, Terrain Projects, and Defibrillator performance art gallery. Her work has also been recently showcased at The Dumbo Arts Festival (Brooklyn, NY), 667 Shotwell (San Francisco, CA), and the Zona Maco Art Fair (Mexico City). She lives and works in Chicago. 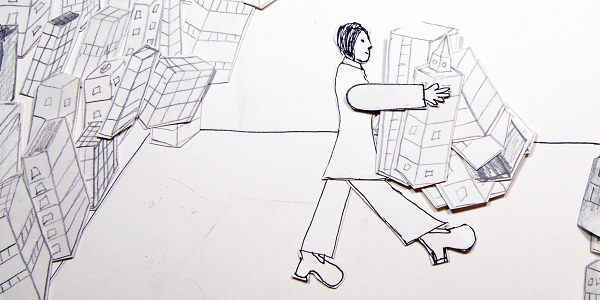