On view through Tuesday, December 23rd

Stefan’s Room (2004) is Kutluğ Ataman’s dynamic video installation comprised of five screens arranged in an irregular circle that surround the viewer. The five screens are angled to echo the dynamic flight or dance of butterflies and moths shown in the projected footage. The imagery is contextualized by the narrative of Stefan Naumann, who – from one of the screens – explains in lengthy detail his passion, or rather lifetime obsession, with tropical moths; from his first encounter with the insects as a child, to how he bred them, and finally to how he killed them to store them in display cabinets in his tiny Berlin flat. The installation forms a dynamic and colorful structure suggesting Stefan’s psyche and transformation. Kutluğ Ataman sees the playful and eerie installation as a metaphor for the complexity of Stefan’s obsession. The viewer becomes confined within the broken and tilted installation, as if walking into a man’s head and thoughts. Ultimately, Ataman illustrates the imprisonment of obsession by creating a sense of claustrophobia.

Kutluğ Ataman (b. 1961, Istanbul, Turkey) established his career as a film-maker in the late 1980s with the creation of Serpent’s Tale (Karanlık Sular) (1994). Ataman has gone on to make several feature-length films, including Lola+Bilidikid (1998) and 2 Girls (2005) Lamb (2014). In 1997 he was invited to take part in the Istanbul Biennial with the long, documentary-style work kutluğ ataman’s semiha b. unplugged.

Ataman’s art career has run in parallel with his career as a film-maker. His most recent full movie The Lamb (2014) premiered in February 2014 at the 64th International Berlin Film Festival as an Official Selection of the Panorama Special section, where it won the CICAE Art Cinema Award for best film in the Panorama section of the Festival. Ataman’s works are in collections such as Museum of Modern Art, New York; Tate, London; Thyssen-Bornemisza Art Contemporary, Vienna; the Dimitris Daskalopoulos Collection, Athens and the Carnegie Museum, Pittsburgh. He has been included in major International Biennials, including the 48th Venice Biennale, the 29th Biennial of Sao Pauol, and Documenta 11. 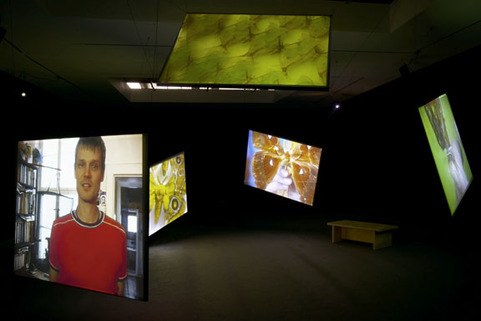