On view through Friday, October 31st

This summer, the Museum of Contemporary Art Chicago presents the London-based artist Yinka Shonibare MBE, the next artist for the annual plaza series. Shonibare’s installation premieres three sculptures from his new Wind Series. Roughly twenty feet high, each monumental sculpture captures the movement of a billowing bolt of fabric, with designs inspired by the sails of ships, and patterns derived from Dutchwax fabric, or “African” batik. Shonibare works with these iconic fabrics to consider how signs of national or ethnic identity are culturally constructed. Curated by Naomi Beckwith, Marilyn and Larry Fields Curator at the MCA, the exhibition is on view June 16 to October 31, 2014.

Shonibare was born in England, and raised in Lagos, Nigeria, in the wake of Nigeria’s struggle for independence. Influenced by his personal experiences living in a newly liberated nation, and the country’s relationship with its former colonial ruler, his wide-ranging works – including photography, sculpture, film, installation, and performance – explore and question the construction of cultural and national identity in a globalized society.

In his cross-cultural investigations, Shonibare often examines moments in Western art history, especially the Rococo and Victorian periods that correspond with the early days of transatlantic maritime trade. He is best known for his installations of headless mannequins dressed in clothing made out of Dutch wax fabrics. These colorful fabrics in vibrant patterns have become a sign of cultural pride and identity for Africans, but they are also a colonial invention, having been mass-produced in Southeast Asia and exported by the Netherlands since the mid-19th century. Shonibare is interested in this type of fabric because it is simultaneously manufactured and an authentic sign of “Africanness.”

Yinka Shonibare MBE (British, b. 1962) studied fine art at Saint Martin’s College of Art and Design, and received his MFA from Goldsmiths College. He is considered one of the Young British Artists (YBA) generation. He has become well known for his exploration of colonialism and post-colonialism, and issues of race and class, using a wide range of media. Shonibare was a Turner Prize nominee in 2004 and awarded the decoration of Member of the “Most Excellent Order of the British Empire” (MBE) in 2005. He was commissioned by Okwui Enwezor at Documenta 10 in 2002 to create his most recognized work, Gallantry and Criminal Conversation, and in 2010, Nelson’s Ship in a Bottle became his first public art commission in Trafalgar Square. He has exhibited at the Venice Biennial and at leading museums worldwide. In 2013, he was elected Royal Academician by the Royal Academy of Arts. He currently lives and works in the East End of London.

MCA Chicago’s Plaza Project is part of the MCA’s ongoing commitment to extending art into the community and enlivening Chicago’s landscape with contemporary art beyond the museum’s walls. Yinka Shonibare MBE is the fourth artist to be chosen for the MCA Chicago Plaza Project, which has previously featured work by Mark Handforth (2011), Martin Creed (2012), and Amanda Ross-Ho(2013). Shonibare’s work is also included in the MCA exhibition Earthly Delights, on view from June 28 to November 30, 2014. 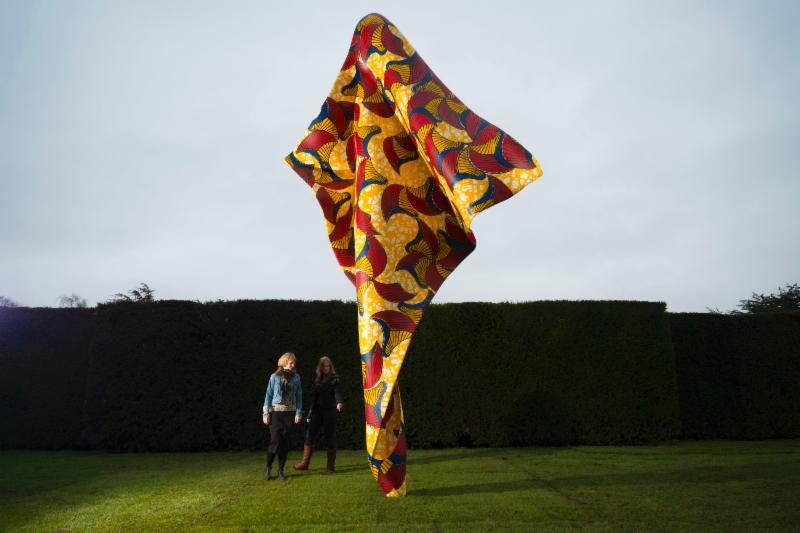