On view through Sunday, July 13th

Home at 5:30. I walk to the kitchen and open the fridge; everything in it’s place. The vegetables in the crisper, sliced meat and cheese stowed in the drawer, dressings arranged small to large in the door, I reach into the box on the second shelf and grab a cold beer. The sun still hangs in the sky like a nagging boss telling me it’s still too early to go to bed. Two days ago the sun set at 8:21. I didn’t see it but my phone told me. Yesterday it was 8:23. 8:25 today. I’ve heard there’s a day in June when it all turns around, a day that calls for clarity, one that begs to be taken advantage of; the years longest day. But year after year it comes and goes just like any other. I always forget to mark my calendar and request it off, but my gut says it’s the 21st. I open my junk drawer and pull out a stack of menus, accumulated over years of coming home at 5:30. Like a dog they’re always there to greet me on my way in the door. I place an order for Chinese food and scroll through Netflix while I wait.

Tim Mann, born in Woodstock, IL, lives and works in Chicago where he received a BFA from the School of the Art Institute in 2013. Mann questions his place in the world through introspection in an earnest lens, translating moments of passing time into works of dependence, leisure, and reflection. Past exhibitions include A Man Walks into a Bar at Alcatraz Chicago and GROUP SHOW ft. No Fun at Kirks Apartment. He will have a solo exhibition at Faber and Faber this coming fall.

Born in 1991 in West Michigan Ryan Nault was a 2014 BFA recipient from the School of the Art Institute of Chicago in Chicago Illinois where he currently resides. In the past few years Ryan has been included in group exhibitions in the US, and abroad. Recent exhibitions include I’m a stranger here myself Breeze Block Gallery, Portland Ore., and Lifetime Activity at Lodos Contemporàneo, Chicago IL. Ryan will be having a solo exhibition at Chicago’s Peregrine Program, and is currently wrapping up the production of his second book to be published through Image Is Easy NY.

Raised in Texas, Allison Wade is a visual artist based in Chicago. She received her MFA from the School of the Art Institute of Chicago and holds a BA in English literature from Stanford University. In addition to So It Goes at Sunday Project, Wade’s work will be featured this summer in a solo exhibition, Thin Troubles, at Ditch Projects in Springfield, Oregon and group exhibitions at Scotty Enterprises in Berlin and La Esquina Gallery in Kansas City. Wade is a Lecturer in the Department of Art Theory & Practice at Northwestern University and is represented by deveningprojects + editions in Chicago. 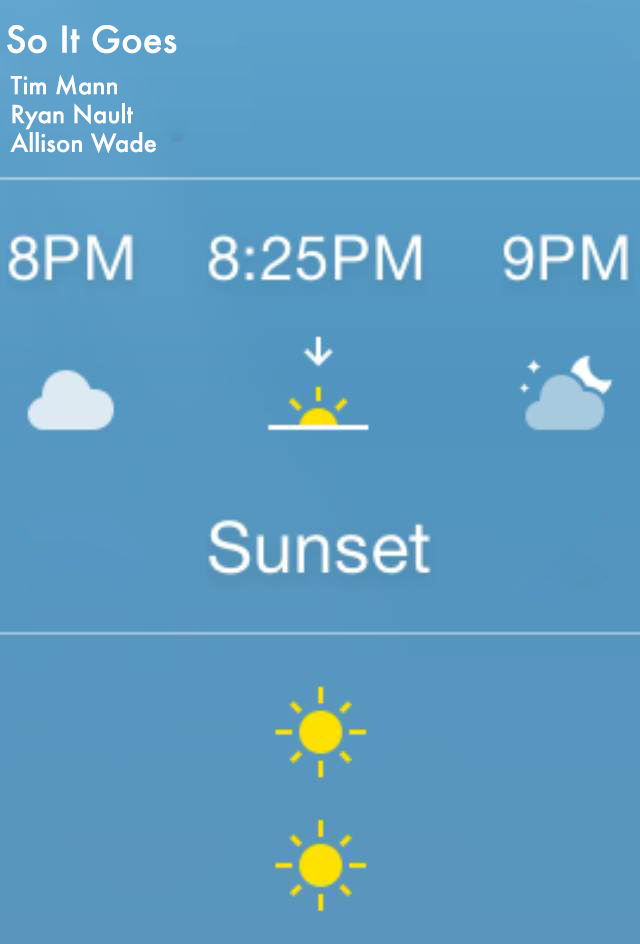