On view through Tuesday, July 26th

Pay attention and you’ll notice everyone has their hand in someone else’s pocket.

Dillinger robbed bankers who were taking peoples homes leaving them on the streets. Folks thought he was a hero. They followed news stories about his heists like sports headlines. Another win for the flamboyant thug who didn’t save the day. He gave regular folks a sense that the world wasn’t completely out of balance.

Mike Olson’s drawings are ghosts of depression-era political cartoons resurfacing to tell us that we never learned. Dad’s still down at the pool hall because he can’t get a job and the Man keeps finding new ways to take more of the money we never had. They feel like they were made quickly, in earnest, with what was left, hopefully just in time. It’s the same mirror and we’re still not pretty.

Purple tweety bird. Green bart simpson. Alien. Five minutes to choose one plaster bank on a family trip to Tijuana. Out of this army of psychedelic characters I could’ve picked a pig but the blue mickey mouse was the one. As a little kid I was sure whoever made these was having visions and needed cash and I was ready to buy.

Dean Roper is sculpting his bongs in the shapes of the things TV has conditioned us to want. Or is it movies? Or music? Maybe it’s Facebook. Possibly it’s just the drugs. Whatever it is he’s got them for us. Not the drugs. The things. The gatorade and the motorcycles and the smiles.

Folks are trying to steal from us but we’re calling them out. Don’t hate the players. Hate the game. Take the prize.

Drawings by Mike Olson and ceramics by Dean Roper.
Curated by Jeffrey Grauel.

Mike Olson, a recovering ventriloquist, is no Julian Schnabel. He lives on the Mississippi River. For regular doses of his handy work follow: http://sciencepainted.tumblr.com Dean Roper, serial chiller, keeps things classy in Kansas City. Stay tuned to the magic at: http://www.deanroper.com/ 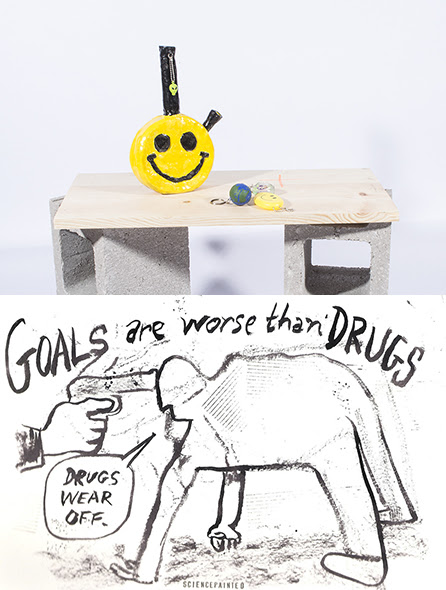