My Hands Are My Bite

On view through Saturday, August 2nd

My Hands Are My Bite is an exhibition of four Chicago-based artists—Lilli Carré, Laura Davis, Carol Jackson, and Diane Simpson—who employ a formal poly-temporality and purposeful engagement with vintage decorative modes. Their respective styles vary, from Art Deco flourishes of the Gilded Age, to the materials of the American frontier, and the International Style Modernism and the blended folk Americana. In the collision of the handmade and the found, the reality of before and after, the old and the new dissolve leaving a distilled and vulnerable form of style for consideration. The title of the exhibition comes from a work by Laura Davis that references Gabriel Orozco’s My Hands Are My Heart (1991).

In Davis’ work, the aesthetics of Mod become a theater of small scale objects and inscribed intricacies. The artist combines structures of store display and the corporeal bodies of fashion mannequins into tableaus of historical association. For Lilli Carré, the individual is always under construction. In books, animations, sequential drawings, and porcelain ceramic figures the person is always a fragile body; a little too pliable, in need of constant catharsis. Diane Simpson’s work is a meditation on structure that considers the meaning and history of decorative forms. For Simpson, Art Deco forms become models for androgynous new primary forms. An interest in early American industrialization and its mythic Western frontier informs Carol Jackson’s work. In Jackson’s recent sculpture, anachronistic forms drawn from Americana sheet music collide with webcam imagery taken from national park archives.

In My Hands Are My Bite, the charge for nostalgia reads as a modernist epithet for skepticism of progress. In their respective ways, Simpson, Jackson, Davis, and Carré work to revive overlooked aspects of human existence. Their coordinates are our coordinates, the consumer landscape of commerce, fashion, décor, architecture, and style. My Hands Are My Bite is on view through August 2, 2014, at moniquemeloche.

Lilli Carré (b. 1983 Los Angeles, CA, lives and works in Chicago, IL) is an interdisciplinary artist and illustrator currently living in Chicago. Her animated films have shown in festivals throughout the US and abroad, including the Sundance Film Festival, and she is the co-founder of the Eyeworks Festival of Experimental Animation. She has created several books of comics, most recently the short story collection, Heads or Tails, published by Fantagraphics. Her work has appeared in the New Yorker, The New York Times, Best American Comics and Best American Non-required Reading, amongst other places. Carré is represented by Western Exhibitions in Chicago, IL.

Laura Davis (b. 1971 Holland, MI, lives and works in Chicago, IL) received her MFA from the University of Chicago in 2004 and her BFA from The Cleveland Institute of Art in 1996. She is currently an Instructor of Contemporary Practices at the School of the Art Institute of Chicago. Davis’ recent solo exhibitions include Unknown Pleasures at Chicago Artist’s Coalition (coinciding with her 2012-2013 Bolt residency there); and Lock the Doors at slow gallery, Chicago, IL, with Jason Dunda. Her upcoming site specific installation, Histrionic Renovation, in the Mies van der Rohe McCormick house at Elmhurst Art Museum, Elmhurst, IL will open on Friday September 12, 2014. Her work has been featured in the group exhibitions Homebodies at the Museum of Contemporary Art, and Two Histories of the World (Part 2) at Hyde Park Art Center, both in Chicago, IL. In addition to her Bolt residency last year, Davis has been selected for the 2014 Elsewhere Residency in Greensboro, North Carolina. She’s been reviewed by the Chicago Tribune, Newcity, and Abraham Ritchie listed her work in the “Top 10 of 2011,” for Art Slant.

Carol Jackson (lives and works in Chicago, IL) received her BFA in 1987 from the University of California at Los Angeles, followed by an MFA from the School of the Art Institute of Chicago in 1992, where she is now an adjunct associate professor of Contemporary Practices. She’s had several solo exhibitions in Chicago galleries- most recently at Three Walls in 2014, and Slow Gallery in 2013. Jackson is currently featured in the 2014 Whitney Biennial in New York. Other recent group exhibitions include Suitcase Art at Kunsthaus Speckstrasse in Hamburg, Germany, and Write Now: Artists and Letterforms at the Chicago Cultural Center. Jackson’s work is included in the collections of the Smart Museum of Art, Chicago; Max Becker-Düsseldorf, Germany; Mark and Judy Bednar-Chicago; and Guido Cabib-Naples, Italy, among others. In addition to the press her work has received in Interview Magazine, Blouin Art Info, and the New York Times, she is also a regularly contributing writer to Frieze magazine.

Diane Simpson (b. 1935, lives and works in Chicago, IL) received an MFA in 1978 and a BFA in 1971 from the School of the Art Institute of Chicago. Most recently she had solo exhibitions at Corbett vs Dempsey, Chicago, IL and at JTT, New York, NY. In 2010, a thirty-year retrospective exhibition of her sculpture and drawings was held at the Chicago Cultural Center. An 88 page catalog was produced in conjunction with this exhibit. Other past solo exhibitions include Phyllis Kind Galleries, Chicago, IL and New York, NY; Dart Gallery, Chicago, IL; Racine Art Museum, Racine, WI; and I Space Gallery, Chicago, IL. Simpson’s work is in the permanent collections of the Art Institute of Chicago; Museum of Contemporary Art, Chicago, IL;and the Illinois State Museum, Springfield, IL, among others. Simpson’s grants and awards include an Arts Midwest/NEA Regional Fellowship; an Illinois Arts Council IAS-Project Grant; five Illinois Arts Council Visual Artist Fellowship awards, and the Walter M. Campana and E. Garrison Prizes from the Art Institute of Chicago’s “Chicago and Vicinity” exhibitions. She has been nominated for awards from the Louis Comfort Tiffany and the Richard H. Driehaus Foundations. Diane Simpson is represented by Corbett vs Dempsey in Chicago and JTT in New York.

Dan Gunn (American, born 1980, lives Chicago) received his MFA from the School of the Art Institute of Chicago in 2007, where he now teaches. In 2013, he received the Artadia award at EXPO Chicago. His work has been reviewed in publications such as Artforum.com, Artslant.com, NewCity Chicago, TimeOut Chicago, and the Chicago Tribune. In 2010, Gunn had a much lauded solo exhibition titled Multistable Picture Fable at Lloyd Dobler Gallery in Chicago and was included in the Contemporary Art Council’s group exhibition New Icon curated by Britton Bertran at Loyola University Museum of Art in Chicago. In January 2011, he was one of four young artists invited to participate in our annual Winter Experiment. In September of 2011, Gunn presented a 12×12 UBS solo project at the Museum of Contemporary Art Chicago, curated by Julie Rodrigues Widholm. 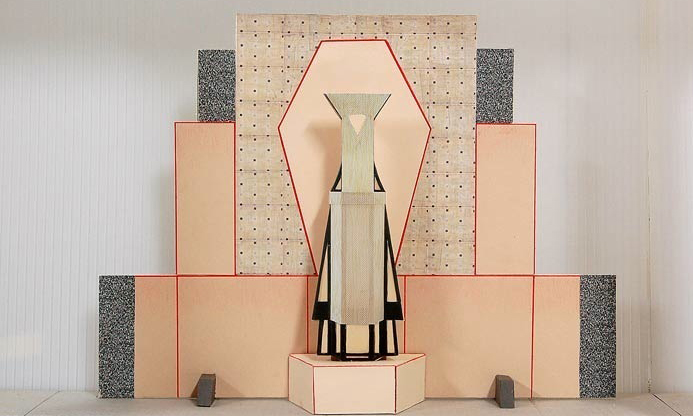