On view through Saturday, June 7th

Jekyll&Hyde presents a group show organized by Jeremiah Hulsebos-Spofford that gathers artists and architects who use landscape/seascape/cityscape as a platform for critical inquiry. The show posits that we have widespread laser beams in our landscapes nowadays, in addition to light events, high-density human impact, makers who act like seeing machines and poets who write with infinite horizons and endless mountaintops. Meis van der Rohe will make a diagonal cameo and one painter will paint while looking towards Chicago. Among the works on view will be dark spaces paired with food coloring and long, leafless flowering stems.

Pamela Fraser has been active making and exhibiting paintings since 1996. Past solo exhibitions of her paintings include at Galerie Schmidt Maczolleck in Cologne, Germany; Galleria Il Capricorno in Venice, Italy; asprey jacques in London, and Casey Kaplan in New York, NY, and most recently at The Blaffer Musuem in Houston (Pamela Fraser: The Fourth Dimension was Ha-Ha, in Other Words, That it is Laughter, surveying 25 of Fraser’s works made between 2006-2013). Select group exhibitions include galleries and institutions such as GAD in Oslo, The Albright-Knox Art Gallery in Buffalo, Wurttembergischer Kunstverein in Stuttgart, and Dundee Center of Contemporary Art in Scotland. Fraser lives and works in rural Vermont, where she moved in 2011, after twenty years of urban living in New York, Los Angeles, and Chicago. She is an Assistant Professor at The University of Vermont.

Lauren Silva was born in Vallejo, California. She studied Studio Art at the University of California, Los Angeles and graduated summa cum laude in 2010. She attended the Skowhegan School of Painting and Sculpture in 2011 and received her MFA from Columbia University’s School of the Arts in 2013. She is represented by ZieherSmith in New York City and recently had her first solo show there that was reviewed by the New York Times. Lauren is the recipient of multiple awards including the Toby Devan Lewes Award, a Visual Arts Fellowship to Columbia University and the Emma B. Keller Award. She lives and works in Brooklyn.

Jesse McLean is a media artist whose research is motivated by a deep curiosity about human behavior and relationships, especially as presented and observed through mediated images. Interested both in the power and the failure of the mediated experience to bring us together, her work asks the viewer to walk the line between voyeur and participant. She has presented her work at museums, galleries, and film festivals worldwide, including the International Film Festival Rotterdam, The Netherlands; Venice Film Festival, Transmediale, 25 FPS Festival, European Media Arts Festival, Contemporary Art Museum, St. Louis; Interstate Projects and PPOW Gallery. Her work has been featured in Art Forum, Cinemascope and other publications. She was the recipient of the Ghostly Award for Best Sound Design at the 2012 Ann Arbor Film Festival, the Overkill Award at the 2011 Images Festival and the Barbara Aronofsky Latham Award for Emerging Experimental Video Artist at the 2010 Ann Arbor Film Festival. Her work is distributed by the Video Data Bank.

Paul Preissner, AIA is an architect and educator. He is founder of Paul Preissner Architects. His work leans on experience from architecture, humor, academia, and art to produce projects that resist immediate gratification and encourage curious reflection on context, shape, and surrounding. He has received numerous awards and recognitions, including inclusion in the International Architecture Biennale Rotterdam and the Buenos Aires International Biennial of Architecture, and his work has been collected by the Art Institute of Chicago. Preissner has taught at the Southern California Institute of Architecture, held the Hyde Chair at the University of Nebraska, and been a visiting artist at the School of the Art Institute.

Assaf Evron earned his MFA from the School of the Art Institute of Chicago and has exhibited his work internationally. He has received various awards, such as The Gerard Levy Prize for a young photographer awarded by the Israel museum in Jerusalem (2012), and The Israeli Ministry of Culture and Education Prize for Young Artists (2010). He graduated from the department of General History at Tel Aviv University, and is currently finishing his MA studies at The Cohn Institute for the History and Philosophy of Science and Ideas at Tel Aviv University as well, where he writes his thesis on Linear Perspective – Construction and Being. Among his photographic commissioned works are Aircraft carrier the Israeli Pavilion at the 12th Venice Biennial for architecture, the renewing of the Israel Museum in Jerusalem and Tel Aviv Museum of Art – Architect Dov Karmi Exhibition.

Tyler McPhee received his undergraduate education in New Media and Philosophy from the University of Maine. After living in Montreal under the auspices of the U.S. Department of Education FLAS program, he completed his M.F.A. in Sculpture at Syracuse University. In 2011, he was a participant at the Skowhegan School of Painting and Sculpture. Recently, his work has been shown at the MoMA Studio, Tufts University Art Gallery, Center for Maine Contemporary Art Biennial, Space Gallery, Dumbo Arts Center, Real Art Ways, and Skulpturenpark Berlin_Zentrum in Berlin, Germany. He has received awards from Space Gallery, Albert K. Murray Fine Arts Fund, Syracuse University, and the U.S. Department of Education. Previously, he was an artist-in-residence at Mildred’s Lane, École Nationale d’Arts Paris – Cergy, and Skulpturenpark Berlin_Zentrum. In Summer 2013, he will be a Fellow at the Lighthouse Works Artist Residency on Fisher’s Island, New York. He lives and works in Brooklyn, New York.

An artist removed from his native Tennessee whilst pursuing an MFA at the University of California, San Diego, Mike Calway-Fagen illuminates the systematic unraveling of humankind. The failure of humans comes much in the same way one’s life passes; once born you begin to die. Natural phenomena have been labeled incorrectly as “natural disasters”, the semantic difference demonizes and is used to prop up humanity by placing it under attack. Maybe we are under attack. Maybe the animals and the gods and the hurricanes and the earthquakes are mad and are on the offense. The story of failure is one that will be revised for all time. He has shown across the country and abroad in venues such as QED Gallery in Los Angeles, Vox Populi in Philadelphia, Islip Art Museum in New York, Banff Center in Alberta Canada, Chelsea College of Art in London, and Yerba Buena Center for the Arts in San Francisco. He attended the Skowhegan School of Painting and Sculpture and has forthcoming solo and group shows in St. Louis, MO and New York, NY respectively. He is currently a Visiting Assistant Professor at Indiana University.

Christopher Meerdo (b.1981) is a Chicago based artist who grew up in the Upper Peninsula of Michigan and spent time in post-soviet Lithuania as a teenager. He has survived several near-death experiences including drowning and crashing in an airplane. Meerdo is a recent recipient of an MFA in Photography from the University of Illinois at Chicago. Currently he teaches photography at the School of the Art Institute of Chicago. His work has been shown in numerous locations including Reykjavik, Nottingham, Seattle, Toronto, and New York with recent exhibitions at Document, Gallery 400, The Hyde Park Art Center, Roxaboxen and Roots & Culture in Chicago. Meerdo was recently an artist in resident at the SIM Artist’s Residency Program in Reykjavik, Iceland and attended the Skowhegan School of Painting and Sculpture in the summer of 2013.

Susan Giles is an artist working in sculpture and video. She has a MA from The School of the Art Institute of Chicago and a MFA from Northwestern University. Giles’ work has shown at the Mission Projects in Chicago, Galería Valle Ortí in Valencia, Spain, Museum of Contemporary Art in Chicago, The Renaissance Society in Chicago, among others. She has received several grants, including a 2009 Illinois Arts Council Fellowship Award for Visual Arts, a 2005 Louis Comfort Tiffany Award and a 1998 Fulbright Grant to Indonesia to conduct research on the intersection of tourism and culture in Bali.

Ania Jaworska is an architect and educator. She currently teaches art, design, and architecture courses at the School of the Art Institute of Chicago and the University of Illinois at Chicago. She holds a master’s degree in architecture from the Cracow University of Technology in Poland as well as the Cranbrook Academy of Art in Michigan. Her practice focuses on exploring the connection between art and architecture and her work explores bold simple forms, humor, commentary and conceptual, historic, and cultural references. Jaworska’s work was recently presented as part of 13178 Moran Street: Grounds for Detroit in Common Ground, the 13th International Architecture Exhibition in Venice (2012). She recently completed a design for the bookstore at the Graham Foundation for Advanced Studies in the Fine Arts in Chicago.

Jekyll & Hyde is a gallery housed on the first floor of a historic Chicago greystone. The space is doubles as the home of Veronica Vegna and Jeremiah Hulsebos-Spofford. Programming focuses on solo and group projects and gives artists the freedom to explore work outside of a commercial setting. 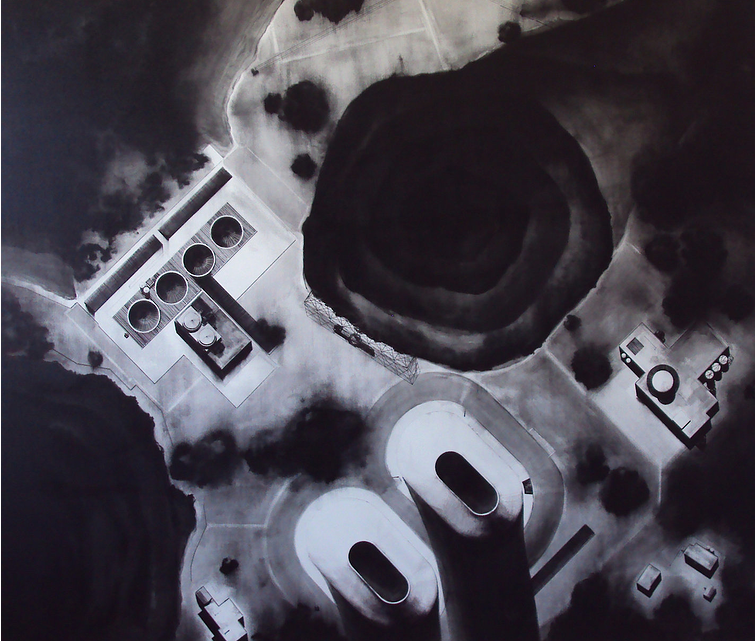