On view through Sunday, May 4th

The School of the Art Institute of Chicago (SAIC) presents New Heirs, an exhibition opening Friday, May 2nd at Rational Park Gallery (2557 W. North Ave) from 5-7pm. Open for three days only, New Heirs is the climactic manifestation of work created over the course of four months by a group of 12 emerging young artists working within the Advanced Fiber and Material Studies Studios.

New Heirs foreshadows both a beginning and an end; it ultimately attempts to make connections between past, present, and future in an investigation of individual and collective identity. Though temporal it may be, the shared sense of belonging and home these artists have developed within the physical space of the studio, has allowed for a constructive dialogue regarding material and conceptual concerns.

Iman Abdul-Ali
Iman Abdul-Ali is building a multi-disciplinary practice based on asking and
answering questions regarding self-identity, politics, and social justice. She does

this through her position as another. (In her case defined as an American, Black,

Allyson Ansusinha intends to reframe people’s mindfulness of cloth and clothing. To explore the function of cloth in relation to body and mind, she plays between art and design.

Alex Barnawell
Alex Barnawell is a transgender artist, working toward seeing landscapes as people, and people as landscapes. Their work engages with topics of queerness, transformation, geology and poetry. Through the use of weaving, dyeing, and book making, their piece “Mountains are Bodies, Mountains our Bodies” engages
the unknowable scope of geological time, and the finite emotional work in dismantling or being dismantled by structures of oppression, directing fissures in political strata, practicing growth, and accepting change.

Bryana Bibbs
Bryana Bibbs’ weavings are a translated result of cataloging her daily struggles,such as relationships, emotions, and the ultimate strive for comfort, trying to
figure out life one day at a time. She enjoys making work that is “universal”, meaning that she can make something that is personal to her, but then apply something to it (like the use of line and color) that may have this effect on the viewer.

Morgan Bussy
Coming from a family dominated by male military figures, Morgan’s work reflects her feelings of war and divinity while incorporating concepts derived from
alchemy. The aesthetic she uses includes a mixture of metal and plastic gold, silver, and copper. With paint, wire, beads, fabric, and waxed string, she aims to create the illusion of wealth and power with objects purchased at the dollar store.

She is particularly interested in how her work can evoke social consciousness through the association of symbols. Modern aristocracy, US military forces, incarceration and the divine become seeds of communication and all coexist within the vocabulary of her work.

Tavia David
The politics of the body and the way in which it governs itself within a singular and social context is a key driving force in Tavia David’s work. She investigates structures and systems of language surrounding the body, often in an effort to construct, reconstruct and deconstruct the politics of movement and commonly accepted behavioral patterns. Tavia’s investigations mirror her concerns surrounding issues of race, gender, and class within a popular culture context.

Taylor Hubbs
Positioned in realms of fantasy, reality, rational and irrational, Taylor Hubbs’ work attempts to establish a visual vocabulary, through use of abstracted imagery,
material, and shape, to address intimately psychological aspects of human interaction. Through material exploration with screen-printing, sewing, felting, collage, and installation, she creates obscurely shaped collage and fabric pieces whose lack of clear narrative mirrors the confusion and dysfunction she believes to be present in human experience.

Sarah Koziol
Sarah Koziol believes that transitional moments punctuate our memory and reveal our true nature to us. She is inspired by cloth’s unique ability to capture notions of desire, memory and historical significance associated with transformation — on an individual, familial and societal scale. Using the vocabulary of a painter and the tools of a quilter, she make fields and objects that function beyond the image, into the realm of the familiar.

Haejin Lim
Haejin Lim’s piece, mək, (the phonetic spelling of the translation of “muk muk ha da” the Korean word “to suffocate”) references the travesties of the Korean ferry
disaster and the futile counting of the victims’ names. Through the ephemeral processes – photo collaging, cutting, dividing, printing, etc., the collage interprets the missing people and signifies the order of cemeteries or memorial park plots. This work contains suffocated feelings, and expresses one’s condolences with solemnity to the people and their families.

Kurt Peterson
In performances built around handmade and found objects, Kurt Peterson combines juggling, story, song, video, and vinyl records as an off the cuff variety show informed by folklore, surgery, and the circus.

Anthony Renda
Anthony Renda makes objects that are queered representations of his past, present and future. Working in both the 2D and 3D, Renda exploits his psychological states in a wide range of materials and processes. He asks these questions: What are my justifications for making art? What is my responsibility as an artist? Who do I trust? How do I perform as an artist?

Emily Schulert
Emily Schulert makes drawings of her surrounding neighborhoods and the interiors of spaces she comes in contact with on a daily basis. Her tableau’s are collaged into re-imagined spaces and operate in a fantastical realm. Her pieces lie between paintings, tapestries and sculptural objects. Through the care of repetitive embellishment, gentle colors and amulet sized sculptural remakes, she celebrates the objects she has rendered useless in all sense of assigned function or purpose. 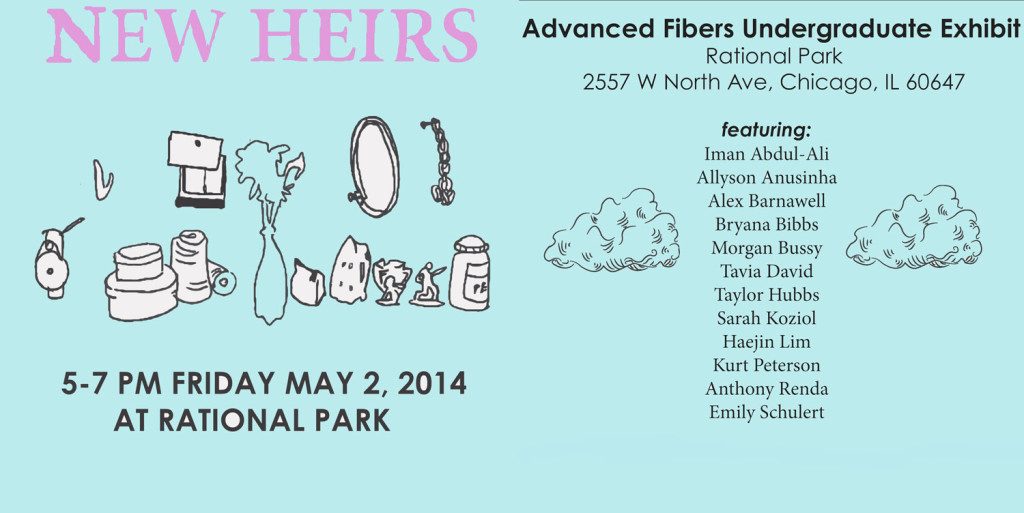