Lucía Sanromán is an independent curator and writer who lives between Mexico City and San Diego, CA. Her current focus lies in investigating aesthetics in relation to efficacy and public practice. From 2006 to 2011, she served as Associate Curator at the Museum of Contemporary Art San Diego. Recent projects include Proyecto Coyote for Encuentro Internacional de Medellin 2011 (MDE11), and Anomalia for the University Art Gallery at UC San Diego (2012). She was a lecturer in the contemporary art symposium SITAC: estar-los-unos-con-los-otros in 2013. Sanromán has been awarded the 2012 Warhol Foundation Curatorial Fellowship for Citizen Culture: Art and Architecture Shape Policy, an exhibition and research project organized by the Santa Monica Museum of Art for September 2014. She will co-curate, with Candice Hopkins, the next edition of SITE Santa Fe’s signature Biennial SITElines.2014: Unsettled Landscapes (July 2014), and is currently organizing the retrospective exhibition inSite: Cuatro ensayos de lo público sobre otro scenario for La Tallera, in Mexico (April 2014).

This lecture is part of the Art Theory and Practice Visiting Artist Lecture Series, and is made possible with generous support from The Myers Foundations. It is free and open to the public. 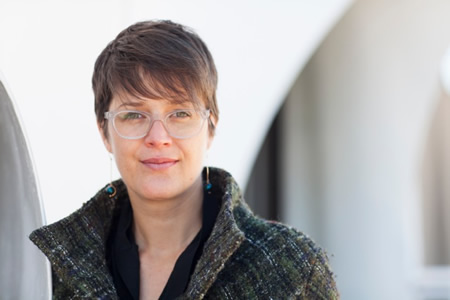