“My work is motivated by a deep curiosity about human behavior and relationships, and is concerned with both the power and the failure of the mediated experience to bring people together.”

Jesse McLean’s work conveys a unique sense of empathy while it both investigates and performs a pressing social concern of our moment: does technology extend the human experience or has the human experience become mediated by technology? The works presented tonight contemplate these questions with acute attention—witty and smart, without sacrificing feeling to cleverness. Even with cultural detritus, McLean creates rich moments of sonic and visual splendor that recall the histories of personal cinema; moments created with a sincere desire to understand her own position with the materials she is drawn to and uses for her artistic practice. In her interview with Jesse Malmed for Bad at Sports she admits:

“There is a great deal of power in mass media but the level of manipulation is so grotesque as to be impressive. Popular culture works terrifically on me; I have a particularly embarrassing memory of sobbing uncontrollably on a plane during Toy Story 3. This kind of emotional response never happens to me in real life. So I would never ridicule my subject, because I’m a fan, too. But I’m also a skeptic.”

Driven by both skepticism and a fascination with the cinematic and televisual experience McLean continues to look, tape, sample and edit American kitsch into videos that consider the implications and concepts working not only behind the scenes but within psychic spaces. From considering the function and desire for bliss and escape in The Eternal Quarter Inch (2008), to utilizing and analyzing suspense and visceral response in Somewhere only we know (2009) and Remote (2011), to questioning the authenticity of emotional relationships in Magic for Beginners (2010), The Invisible World (2012) and Just Like Us (2013), McLean collages a variety of sources into something wholly new, without sacrificing the genealogies of its constituents, and allowing space for her viewers to draw lines that contemplate the function of mass media in our experience of everyday American life.

Jesse McLean is an Assistant Professor in the Department of Cinema and Comparative Literature at University of Iowa. She is a former University of Illinois at Chicago (UIC) Visiting Professor and Graduate. She has presented her work at museums, galleries, and film festivals worldwide, including the International Film Festival Rotterdam, Rome Film Festival, Venice Film Festival, Transmediale, 25 FPS Festival, European Media Arts Festival, Impakt, CPH:DOX, Images Festival, Contemporary Art Museum, St. Louis; Interstate Projects, PPOW Gallery, both New York; Museum of Contemporary Art, Detroit; Gallery 400, Three Walls, both Chicago; Museum of Contemporary Photography, Chicago. She grew up in both Pittsburgh and Philadelphia and attended Oberlin College, where she majored in Studio Art.

Inspired both by Peter Campus and the limitations of technology, an external composite portends a frightening internal realization.

Dipping between ecstasy and despair, transcendence and absurdity, this movie journeys to a hidden space where you can lose your way, lose yourself in the moment, lose your faith in a belief system. An exhausted and expectant crowd waits on this narrow span. It is not a wide stretch, but it can last forever.

What can a face reveal? Balanced between composure and collapse, individuals anxiously await their fate.

Magic for Beginners examines the mythologies found in fan culture, from longing to obsession to psychic connections. The need for such connections (whether real or imaginary) as well as the need for an emotional release that only fantasy can deliver are explored.

In the collage video Remote, dream logic invokes a presence that drifts through physical and temporal barriers. There is a presence lingering in the dark woods, just under the surface of a placid lake and at the end of dreary basement corridor. It’s not easy to locate because it’s outside but also inside. It doesn’t just crawl in on your wires because it’s not a thing. It’s a shocking eruption of electrical energy.

Chicago Film Archives and BRMC Group sponsored this collaboration between myself and musicians Sich Mang. The footage was all pulled from films located in the CFA’s awesome collection. The piece was made for the CFA Media Mixer, an yearly event to benefit the CFA.

A deceased hoarder, reconstituted through technology, recounts a difficult childhood as inhabitants of a virtual world struggle to reconcile materialistic tendencies. A scientist leads an effort to understand the passage of time, but the data is unreliable. The question remains, what happens to our things after we are gone?

A banal and familiar landscape comprised of box stores and parking lots proves a rich site for longing, intimacy, and radical change. Celebrities are observed in this environment and are reduced to ordinary beings in the process. An enigmatic protagonist reveals little moments of subjectivity that escape into the piece like a contaminant, rupturing the view and evidencing the paradox of connection and belonging within systems that simultaneously contain us and comprise us. 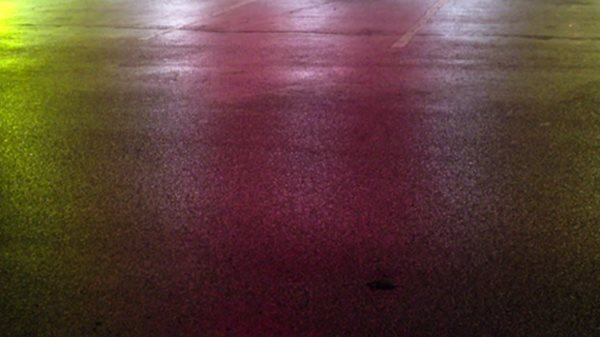